Sticking the body together 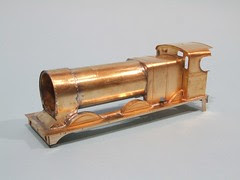 "With all the big bits built, all I have to do is stick the body together", I thought, "Simple."

Well, the firebox went on first. The trick seems to be that it goes inside the splashers, not over the top of them as I'd first supposed. At least it fitted so nicely this way so I assumed I was right.

Next up was the boiler/smokebox unit and aside from a touch of fettling at the front around the smokebox saddle. I think the inner saddle needed to be a touch further forward than I mounted it but the problem was quickly solved with a small file.

Finally to the cab. The dry run showed up some badness going on. Somehow the firebox overhung the rear splashers. Only by half a millimetre but that's enough to look 'orrible. There was a gap around the bottom.

Much head scratching later I still couldn't work out what had gone wrong. Of course this didn't mean I could just ignore it, nor was any solution involving filler on the agenda. In the end some gentle filing with a fine needle file took off the excess. The metal is very thin and the strokes had to be along the length of the metal rather than across it. After this, the cab fitted perfectly.

With everything tacked in place a lot of time was taken up looking along the boiler from the side and top. Trying to figure out a way to measure if the barrel was parallel to the footplate and generally looking for a lack of squareness. Once I was happy, proper seam joins held everything in place.

Despite this, it still all looks square. Which is a relief.
Posted by Phil Parker at 6:24 AM