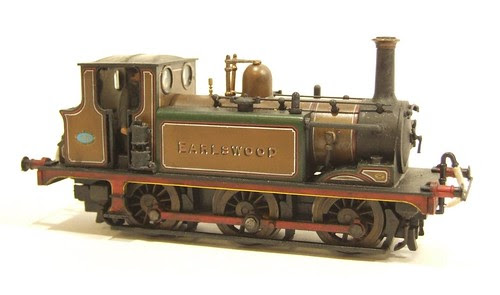 Just a short post as I'm too busy and too tired to get a lot of modelling done in the evenings at present. Normal service will be resumed next week.

In the meantime, feast your eyes on this - an emergency locomotive.

Emergency locomotives are the one that live in the stockbox at exhibitions but rarely make an appearance on the layout. When they do, it's an indication that everything else has failed and it's time to reach for the lifebelt !

The Terrier is a Hornby, ex-Dapol model that I use occasionally on The Hellingly Hospital Railway. As supplied it was painted in the correct livery for the era the layout is set in but I'll admit that the prototype engine never actually traversed the line. In fact this one doesn't as the wheelbase is quite long for such a small engine and it struggles a bit around the model curves. However it does allow me to keep something moving if all the "proper" locos are giving me grief.

To be honest, my OO layouts don't need emergency power as I've got plenty to models that will keep plodding along for a whole show. I think I was probably there when I bough this one, but it is such a lovely colour and so well painted, it seemed a shame to resist. The West Midlands name also appealed although I'd have preferred Stepney thanks to a childhood where I read (note read, not watched on telly) Rev Awdry's books.

The model took more work than I had expected. The pipes coming out of the side of the boiler are rather horribly moulded in and had to be scraped off for replacement with whitemetal versions. The smokebox dart was replaced with a Romford brass version and I suspect the Westinghouse pump is Gibson. A bit of weathering to hide the touched up boiler paintwork and the model looks the part.
Posted by Phil Parker at 6:18 AM