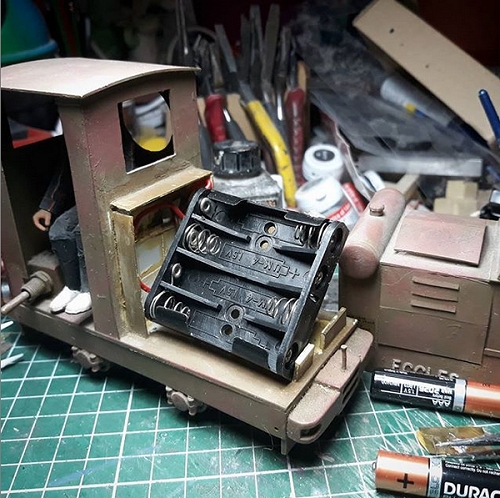 My Saltford Models Ruston is at least 30 years old, but since it had performed sterling service on previous temporary garden railways, I really wanted it to do a few circuits on the new one.

The years have taken their toll on the glue joints. I think they were made using plastic cement rather than solvent as I'd yet to master making strong joints with runny glue. I've run solvent into the back of a few joins and this seems to fix things, but one area I couldn't repair was the battery box under the bonnet.

Lack of space means this was built from plastic with metal contacts glued in with epoxy (I think). As it was falling apart, and the contacts had always been a bit rubbish, I decided a replacement was in order, but a proper pre-made one this time.

Originally fitted with AA batteries, I had to drop down to AAAs as this was the only box small enough to fit. Not a problem though, a little soldering and we were good to go.

On the track, there was a surprise. Eccles, previously a fairly sedate locomotive, shot off like the proverbial scalded cat. I did manage to get a circuit out of it without falling off on the corners, but only just.

What I'd forgotten was that the original box held 2 pairs of AAs wired to give 3volts. The new box with all the batteries wired in series, produces 6volts. Queue rocket-powered loco.

There is an easier option: just cut the box in half lengthwise, You'll then only be giving the motor 2x AA batteries (3v). I've done a similar thing to the club Airfix windmill and it happily turns at 1.5v at 6 rpm.