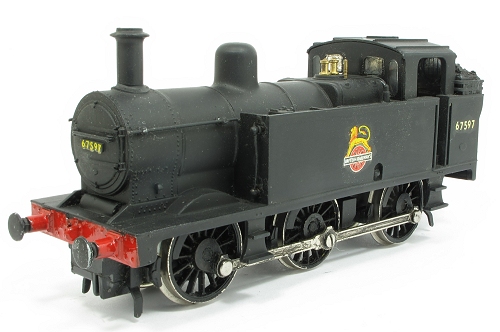 My second ever model railway locomotive recently turned up when I was looking for something else. In fact, when I found it, I realsied it was what I'd been looking for.

The model is a Hornby R302 Jinty 0-6-0 tank engine. It arrived in 1979 - my memory isn't that good, but I do remember that it was the era of locomotives coming a with a free "Pugh and Co." open wagon. These were destined to be collectable  according to the advert at the time, but a quick search on-line reveals there are thousnads of the things kicking around. Even being boxed doesn't make much difference since so many were made.

Anyway, the Jinty was supplied nicely lined out in BR black, but over the years succumbed to my detailing efforts. Handrails appeared on the tan fronts, there's a Scottish coal extension plate at the back and of course, the paint is now matt black. Except where the transfers are, because I varnished these like you were supposed to.

The model still runs, and pretty well too. OK, it's not modern RTR quality with it's XO4 motor, but not badly. The Magnahesion still works too, I remmeber it causing some consternation when my dad and I had to make a trip to the Train Shop in Warwick when the loco stopped working. The assistant looked underneath, removed a track pin lifted up my the magnet and the model worked. Slightly red faces all round, but we both learned a lesson.

Purists will scoff and say there are better Jintys out there and that's true, but this one deserves a place in my showcase.
Posted by Phil Parker at 5:30 AM

I've got two of those pugh wagons in their boxes. I made a gauge one version out of nostalgia!