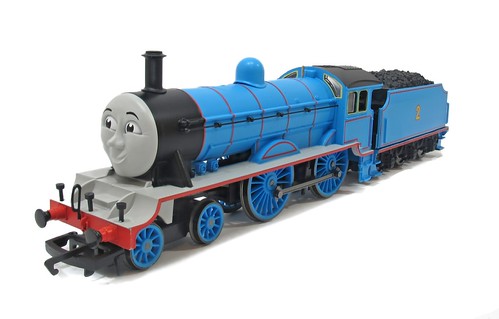 Last week, we had one of my oldest model locomotives on the blog, this week my newest.

Edward was my favourite from the Rev Awdrey stories. He is nice and kind. He's also the first locomotive to appear in the books. Thomas doesn't turn up until book 2.

Maybe we pick the loco that is most like us, or at least we like to think is most like us. (Note: This is in the original books. I'm not convinced by anything later)

Anyway, building an Edward has always been on my "to do" list. I have a GEM kit stashed away for the job, but when presented with the chance of a brand new, half-price Hornby model recently, I decided that I'd go for it. The kit can be sold to pay for the RTR model. I'm rubbish at doing the faces anyway.

Edward's prototype is a bit of a mystery. According to the rare Awdry book* that covered the back stories, he's an amalgum of different engines including both Furness and LMS locos. The Thomas Wiki has more details - it is a can of worms.

As such, Hornby haven't done a bad job. There's a lot of detail on the model with a seperate handrail and some nice footplate lubricators. Would the target market have missed those? I doubt it. Not sure about those lamp irons on the front though.

Power is from a tender drive unit which is smooth enough and I suspect on a decent controller will be better than many purists want to admit.

*If anyone has a copy of The Isle of Sodor: Its People, history and railways they don't want, I have space on the shelf...
Posted by Phil Parker at 5:30 AM

Hi Phil, long time reader.
Great minds think alike as Edward was always my favourite too. Lots of modelling potential with it and, for half price, a steal!
Chris in Shropshire.

I gather from the NGRM online forum that Bachmann have the rights now, and will be selling their American range over here- don't know if they do an Edward though, but given a lot of their models are either entirely new toolings based on the television characters, or updated old Mainline models, it will be interesting to see what they do.

On 13 April 1982, when Wilbert Awdry was exhibiting his second “Ffarquhar” layout at the MRC Easter exhibition in the Central Hall Westminster, I had the privilege of having a lengthy conversation with him. This covered the inspiration for the various locomotives in the original series of books. I thought the information fascinating and two days later (while it was still fresh in my mind) took the trouble to record it in writing.

In the case of two of the locomotives, Wilbert Awdry told me that the illustrator of those early books (at the time that would have been C. Reginald Dalby) did not do what he (Wilbert) wanted.

“Henry” was intended to be in the style of a Robinson GCR Atlantic but was rendered a Pacific.

The Bachmann news is here: https://www.world-of-railways.co.uk/brm/reviews/bachmann/news-bachmann-licence-thomas-the-tank-engine-in-the-uk

and yes, they do make an Edward. I think one is enough for me though.

Phil, this may sound like a silly suggestion, but have a check of your local library's catalogue. I was rather surprised to find a copy of 'The Island of Sodor: It's People, History and Railways' was held at my county library headquarters in Derby!

Didn't seem like anyone else was in a hurry to read it either, must have had the thing loaned out to me for a good two months. Plenty of time to copy down any information I needed.

I wonder if, in time, we might also see the reappearance of the Bachmann Junior locos - I seem to recall some of these being of interest to some NG modellers.

(Mind you, I could imagine some standard gauge "types" also being interested if they were to go further and introduce something loosely based on an AGEIR boxcab, powered by their "Ernie" multiple unit chassis. OK - I don't think it would be impossible for modellers to build homebrew versions - but it might not be too easy to source the chassis these days.)

Not sure what Sir Nigel Gresley would make of Hornbys Edward 🤣