Dolly on a board 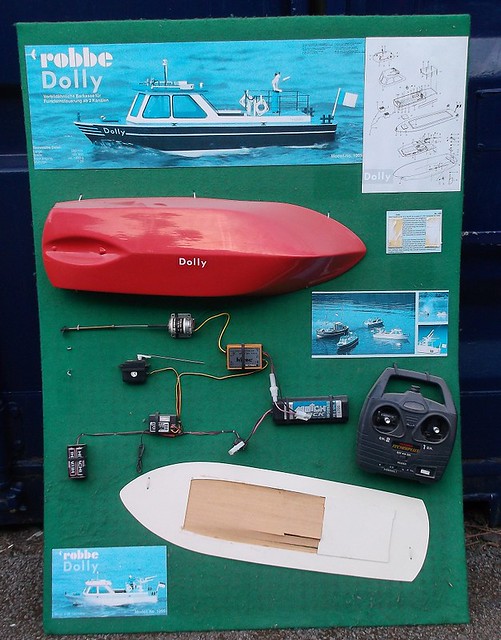 A refuge from the Gee Dee closure, this board was put together sometime between 2002-2004 when the RC department expanded into the lower area of the shop.

It clearly shows a Robbe Dolly kit with all the parts required to make it work connected up. If you are struggling with plugging the bits of radio gear into each other then it would be a big help, except that the radio would now be 2.4gHz and your speed control (the yellow box) would normally have a Battery Elimination Circuit (BEC) so you wouldn't need that pack of AA's to power the receiver.

It's also quite useful if you want to know what goes in a boat - there's the motor and propshaft plus a servo that would originally have been attached to a rudder.

When offered this, my first thought had been that I'd build the boat, but as I already have a half-built Dolly kit in my store, I'm now thinking I should finish this and display the two together. I think it will look really impressive. More to the point, this shop display is the sort of thing that once it's gone, is gone for good, and I think that would be a shame.

I think a good call to leave it as is.

It is the sort of display I wish was seen more often. I'm sure I'm not alone in being put off building an R/C boat by the fear of what needs to go inside it, but on the other hand don't want to go down the RTF (Float in this case) approach.

Actually, another reason for me not having an R/C boat is not having anywhere to use it, which is rather amusing given that the house is surrounded by dykes on three sides.