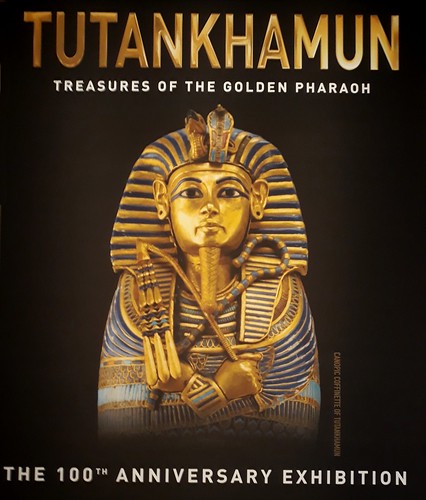 Say "Tutankhamun" to most people and one image will pop into their head - that of the great gold death mask. Look at this poster and what do you think you see? The very same mask, or do you?

"Great", I think, "I'm going to grab my chance to see one of the most iconic historical objects in the world." Tickets are booked for the show (£26.50) plus the train (bargain fiver each way, thank you Chiltern) and off I head. 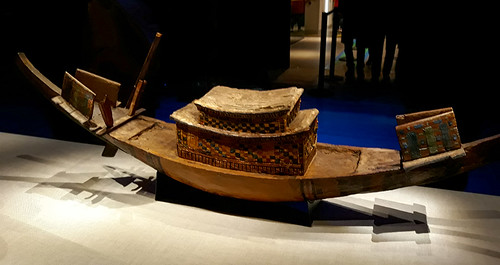 Most people are more excited by the gold stuff that the boy king's tomb was filled with. I'll admit that it is very impressive to look at. OK, the workmanship isn't as good as that of the Staffordshire Hoard, but we are seeing objects 3000 years old. An unimaginable time ago, some craftsman made this with his bare hands and the most basic of tools.

Anyway, we work our way through. The history of the king is told, as is the story of his discovery, including the detail that the famous curse was entirely invented by the Daily Mail. They wouldn't do that nowadays (cough).

Eventually, we are led upstairs, the suspense building. The final room. And a great big stone statue. Impressive, but not what I'd been looking forward to.

Querying the lack of mask with a steward, it was explained that the mask is too "fragile" to leave Egypt. Explained in a way that makes me sure that this isn't the first time the question has been asked. There is (I am told) a replica in the gift shop. Indeed there is, but it's poorly displayed and IN THE MIDDLE OF THE GIFT SHOP.

Now, I'm not alone in expecting the mask. The Daily Telegraph critic pointed out the same thing. What we are seeing, as anyone who can understand the text beside the image on the poster would grasp, is a miniature version of the coffin about 12 inches tall. It was used to contain some of the kings' organs. 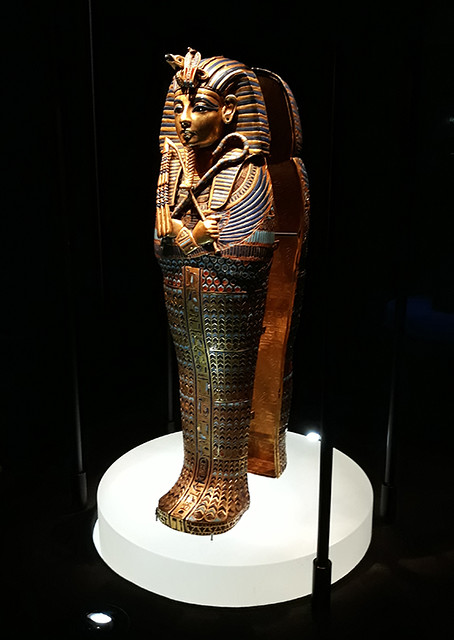 Don't get me wrong, this is a beautiful thing. Both front and back are intricately decorated and stunning to look at, but they are not the iconic mask. I'm afraid I enjoyed the show but felt cheated at the end.

Had I been aware upfront, I'd probably have given it a miss, or at least not so disinclined to spend money in the overpriced gift shop. It makes toy trains shows look a bargain by comparison as I was through the whole thing in under 3 hours.

Anyway, enjoy more photos over on Flickr.
Posted by Phil Parker at 5:30 AM

Found and felt exactly the same thing. I saw the exhibition back in the 70's and even as a small child I remember, and was moved by the Golden Mask. Would have probably still gone to the new exhibition but at least I would have known before hand that I shouldn't expect to see it.

I wonder what could be done for a model railway station called "Tooting Common" with some sort of Egyptian styling.

Something similar was suggested back in the '20s before the Northern Line extension to Morden was opened:
"With Egyptology very much in fashion after the discovery of the tomb of Tutankhamun in 1922, there was also a proposal to call the line the Tootancamden Line as it passed through both Tooting and Camden"
From Wikipedia https://en.wikipedia.org/wiki/Northern_line
Luke