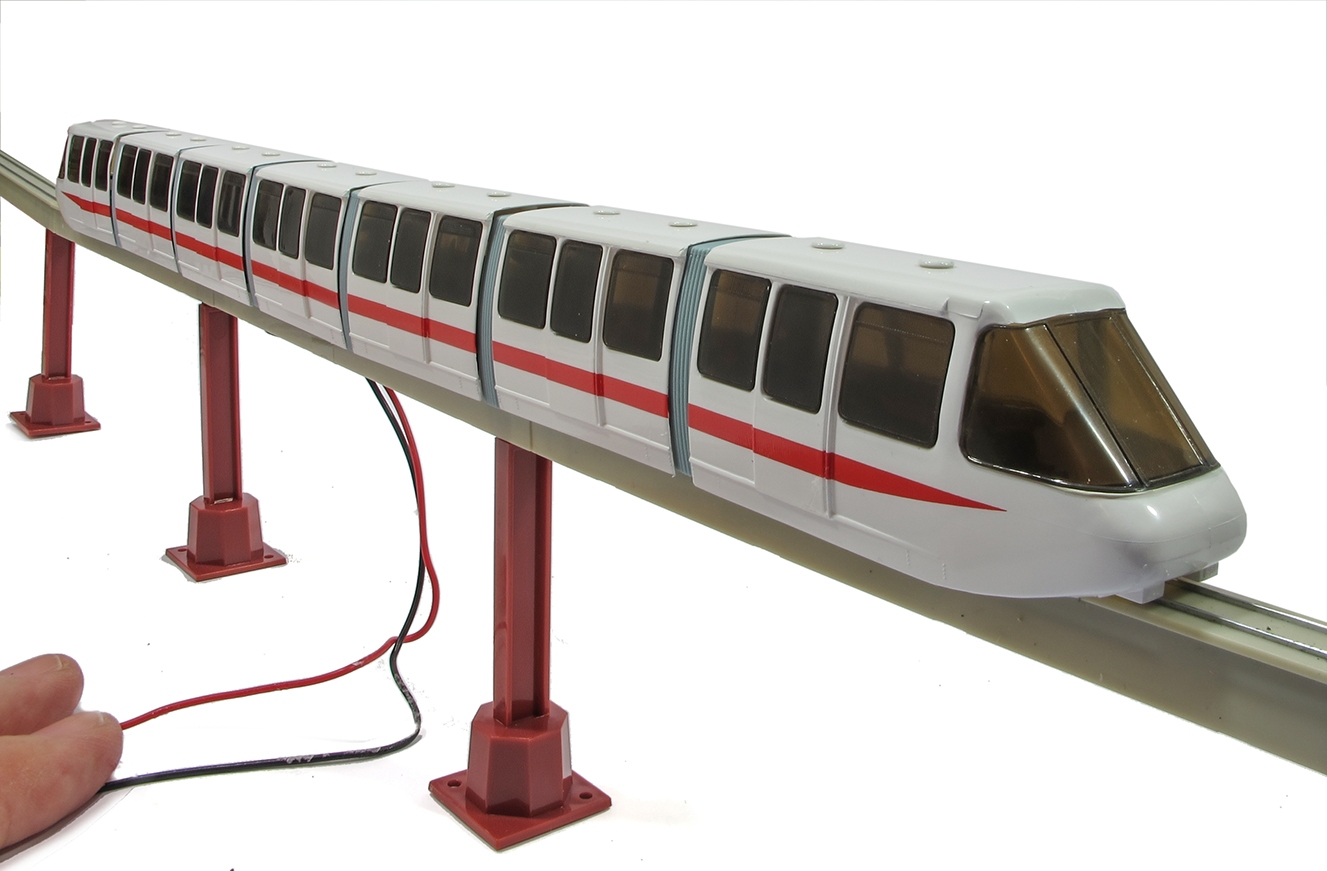 Bargain of Doncaster show for me was this E-R Models HO scale monorail.

The 39cm long train comes with an oval of track plus the supports, clips to hold the rails together really strongly and some other bits I can't identify - probably because there are no instructions in the box.

Never mind, a quick track and pickup clean and a dose of 9V from a battery sees the model trundle along the straight lengths of track.

According to the web, this is a model of the Sydney monorail and it certainly looks like it. I missed riding on this by a couple of years, much to my annoyance but at least I can enjoy it in miniature. 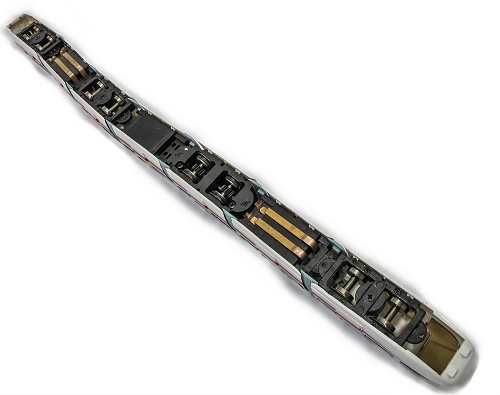 Looking underneath, the wheels look just like normal HO ones, but with the flanges on the outside. The powered wheels both have traction tyres, pickup being from long metal strips rubbing on the rails. 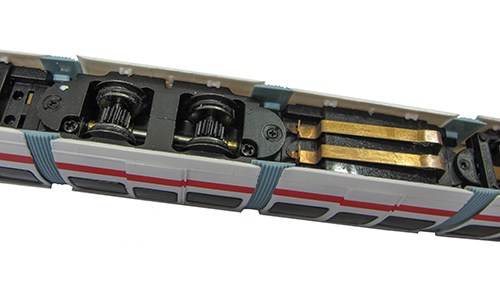 My first impressions were that this is a bit of a toy, but it's pretty accurate, at least in looks. As the basis for a more detailed model, I can see it has loads of potential. Maybe I'll build that futuristic model railway I've often wondered about after all. Making my own track shouldn't be too hard, and watching the second-hand market might produce more sensibly priced trains.

And now the obligatory clip from the Simpsons:

Email ThisBlogThis!Share to TwitterShare to FacebookShare to Pinterest
Labels: monorail

The end segment's a tad shrunk, otherwise that's not a million miles off a 7-segment Merry Hill Monorail....

Just out of curiousity, what's the space between the conductor "rails" on that track?

The reason I'm asking is that most of what I can see in the "underside" shots of the "train" looks very much like stuff that can be found on a lot of models of articulated tramcars.

OK - I know that tram (and conventional train) wheels tend to have any flanges on the inside - the drive axle cogs look very "chunky" - body panels don't tend to be extended down past the wheels and track - and the model trams I've encountered haven't had skate contacts pressing down on the track - but I'm looking past that stuff.

Please note that I'm not suggesting running any model trams on the track sections (even if they actually fit - I don't know any of the dimensions).

OK - it might potentially be fun to run a model of something like a Düwag "Gelenktriebwagen" over this sort of track - but I think I'll leave the fantasy stuff to other people.

No - my reason for mentioning the resemblance has more to do with wondering if it might be possible to use parts from tram kits (and possibly secondhand / damaged RTR) for detailing models of monorail vehicles.

For all I know, it might even be possible to use modified model tram stuff to build additional monorail vehicles.

Realistically, I'm not expecting to come across any of these monorail models myself - certainly not at a price that might tempt me to do any experiments.

However, seeing these photos has given me an idea for how it might be possible to scratchbuild models of ABB Eurotrams and similar designs of tram, if I ever get the time.

Of course, it goes without saying that I have no plans to chop up any monorail models (even if I come across them).

No - when I see stuff like this, it's exactly unknown for me to think about any theoretical opportunities for "cross kitting". Whether I'd actually go ahead and try building any of this stuff is another matter completely.

Incidentally, I suspect the resemblance between the Sydney monorails (and models of them) and the ones formerly at Merry Hill might be far from accidental ... .

I'll have to go and measure the conductor rails - the set is in store at the moment.

The Merry Hill Monorail, of course, headed off to Australia and only stopped running a couple of years ago.

My question was based on a gut feeling that, when designing any "special" models, manufacturers would be likely to use as many standard parts and assemblies as possible. Ultimately, this is just sound design / engineering practice.

The track also looks interesting. It has the appearance of 2 wires or thin metal strips, stuck to the top of a plastic beam profile, a constant distance apart. I have actually seen model tram track of that sort of construction (OK - 2 strips of wire or thin brass angle, soldered onto PCB material, to a constant separation).

I know that sort of thing can work. However, I strongly suspect that, here, the manufacturers would have been more likely to stamp out some flat metal pieces, complete with wire attachment points - solder wires to them - and position them in a mould, before feeding in some molten plastic.

Obviously, I could be wrong - I might never know for sure.

Ultimately, all that really matters is that it works (and isn't ridiculously expensive to manufacture).

Well, it also matters that it looks right - and (when they're being made) that enough people like the things enough to think they're worth buying.