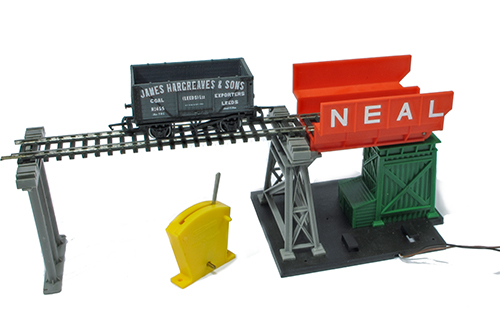 The Hornby operating tipper set is an interesting accessory. My best guess for its launch would be the late 1980s as I seem to remember it appearing in Scale Trains magazine. The set is often paired, including by Hornby, with the R515 operating conveyer belt.

In operation, a locomotive pushes the wagon up the incline and on to the tipper. Once uncoupled, a catch unlocks the wagon end door and it is tipped to drop the load. When used with the conveyer, the load normally falls in this to be lifted into the back of another wagon, which is in turn unloaded on the tipper in a never-ending sequence.

I'm not convinced by the operation. You have to uncouple the wagon so it can be lifted, but this has to take place just before it's on the tipper. BUT the wagon then has to be pushed hard against the stop to release the catch. I suspect for most people this requires a bit of "hand of God" action.

My set cost less than many RTR wagons and seems pretty complete, although the box is a bit faded.  I didn't worry about wiring up the switch for testing, just using a 9V battery. As far as I can tell, the motor is on or off raising and then lowering the tipper bridge. I reversed the polarity but don't think I needed to.

One fun feature is the load. According to the box phot, this looks like coal or slate. In mine, where it was sealed in a bag, it's transparent balls. No idea what they are supposed to represent, a bulk order for fortune-tellers perhaps?