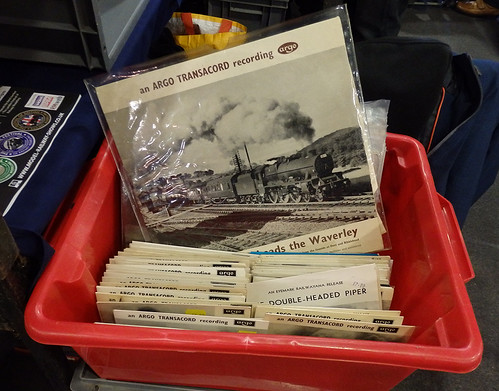 Doncaster, or as I'm supposed to call it, The Festival of British Railway Modelling (I did suggest DonkRail would be snapper but was met with a cold, hard stare) was busy. Saturday was extremely busy, and Sunday pretty good. We'd been worried that people scared of the weather had transferred their affections to the first day, but it didn't seem so.

Not being tied to an exhibit, I was down for a couple of layout shoots, some on-line content and helping out the video team. And chatting. Lots and lots of chatting.

As you may recall, I love chatting to people and it's very interesting to get a bit of feedback on my work in the magazine. It seems tiny layouts are very much on vogue with my recent box-sized project going down well. This was confirmed by the owner of the excellent 009 layout "First" who it seems has inspired many people over to two day to give modelling a go simply because of someone showing them a working layout.

Layout quality was as high as you'll find anywhere and while the shows tend to be heavier with trade than many, there was much to grab people, or at least for them to grab followed by some credit card wielding. I managed to buy a train set which I'll bring you later...

Cake supplies were rubbish, but there was some chocolate covered Turkish delight instead of my usual 4-finger KitKat sustenance, it seems you can't buy these 'op North. Not in the garages I visited anyway.

Unusually for me, I left a bit early on Sunday. With 500+ photos to pull off the cameras and a trip to Cardiff on Monday, I didn't want to be too late back. As it was, I really enjoyed the show. If you stopped by for a chat, thanks very much, it was great to see you.

I even managed to bag some photos for the blog which you'll find on Flickr.
Posted by Phil Parker at 5:30 AM