The case for partworks 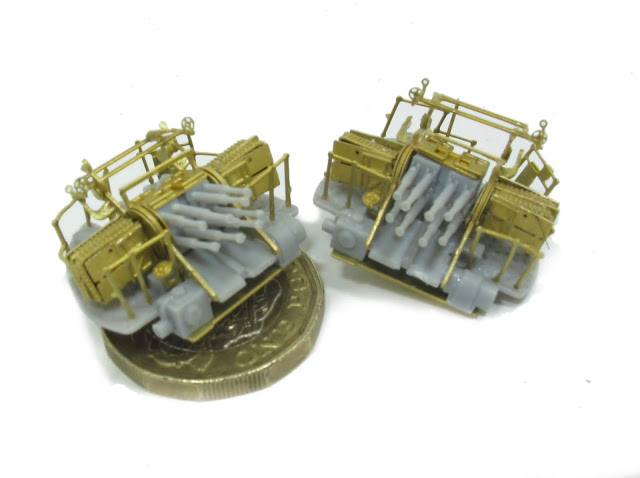 My dad is working on a model of HMS Hood using the Hachette partwork. So far the hull is built and he's on to the superstructure. On the bench at the moment are some guns. Each is a masterpiece of plastic and etched brass with over 20 components, all of which fit on a £1 coin.

The photo is a bit cruel to his assembly, but he isn't confident with etched brass and is 77 years old. Working with very fiddly parts, most of which haven't disappeared into the carpet, his results aren't bad. Remember they will part of a 4ft long boat that will be sailing on a pond. You are hardly going to see these things at all, but they are still well detailed.

I suspect a similar kit with everything in a box would use lumps of whitemetal - adequate but not nearly as good close up. While this might be a pricey way of building a boat, it's possible to build a very detailed model.

The most important thing though is that he's plugging away and enjoying it. Every issue completed gives a sense of achievement. Despite being a model-maker all his life, there's no way he'd have tackled a complex project like this any other way.

Modellers on forums are very dismissive of part-works, but get a good one and they can be fun.
Posted by Phil Parker at 5:30 AM

I think that last sentence is crucial, "....get a good one and they can be fun.".

You can never be sure in advance, whether or not it will be a good one, even from the same publisher. Sometimes they don't even tell you accurately how many issues there will be, so working out the cost is hard, I was burnt by the Mallard partwork which has put me off starting another one, although i'll never say never.

The trouble is that on forums, there are always people who have never even had a go rubbishing the concept. Like everything, there are good and bad ones, but the good ones are very good.

Good on your Dad at 77 years old. When I was a lad my parents got an encyclopedia part work for me from the newsagents. In the end the total cost was probably more than a set of Ecyclopedia Britannica, but I got enjoyment out of reading each week's issue, whereas I would probably only have read a fraction of the EB, if at all.
Similar for HMS Hood, yes buying it as a full kit would probably be cheaper, but even for an experienced modeller it must be daunting deciding where to start. Even for a 77 year old there must still be something of the boyhood excitement of looking forward to getting the next part and making it up, just like when we were young.
And good for you Phil, encouraging him to keep active, proudly showing us his progress and therebye motivating those of us of an older vintage to keep going and not give up.
Thanks.
Bill L