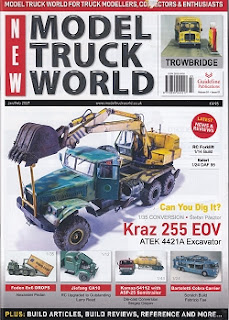 It's a brave company that launches a new paper magazine these days, but that's what Guideline Publications have done - twice.

Home to a number of modelling mags already, plus Railway Bylines and British Railway Illustrated, they obviously see a future for paper, as not only has Model Truck World appeared on the news stands, but it's sister magazine for countryside diecast fans - Model Farmer.

Starting with the basics, the mag is full colour, A4 size and printed on very heavy paper so the photos reproduce really well.

If you've ever looked at a military modellers magazine, much inside will be familiar to you, just with less (i.e. no) tanks.

This is high-end model making, not just sticking plastic kit together. The materials and techniques are the same you'll see in military modelling, except for the forklift truck, which covers radio control installation as well.

Scales are generally much larger than those railway modellers will be familiar with - 1/48 being the smallest found in there. As such, many of the methods won't be directly applicable, but there is much to inspire.

If I have a complaint, it's that the issue could do with one or two less articles to allow more space for the photos. They are all sharp and clear, but often reproduced in 5x4cm boxes with massive chunks of text alongside them, dominating the page. A few had me wanting to see more.

That said, the editorial to advertising content is high - you get a lot for your £4.95. While I can't claim I'll be subscribing, I will be flicking through and picking up the odd issue as the civilian subjects given the full-fat modelling treatment suits me more than the guns'n'glory of the military magazines. If you see a copy on the shelf, I suggest you'll enjoy it too.

Full details over on the Model Truck World website.

(Note: I bought this issue with my own cash - I'm a sucker for the first issue of model mags)

Email ThisBlogThis!Share to TwitterShare to FacebookShare to Pinterest
Labels: Magazine, Other peoples hobbies

I can't help wondering if this might be a relaunched version of Truck Model World magazine - especially as a website in the name of TMW directs to the same page.

Comments about an existing international readership would also suggest that this might be a rebranding/ reimagining of an existing title.

Anyway, an additional magazine about farm and industrial machinery sounds like a logical new direction.

I'm not complaining if this is the case - I liked TMW - so I'm certain I'll like both issues of MTW that have appeared so far.

I'm not sure my debit card will like it quite so much, though ... .

After all, it's recently had a couple of workouts - buying some railway books and magazines from a specialist publisher - and "going for gold" on RMweb. I must admit, though, that both were excellent deals - so I don't mind in the slightest ... .

Now that I've seen the first two issues of MTW, it's pretty much what I was expecting - a "reboot" of an existing magazine, full of high-end models (and people explaining how they built them).

As for modelmaking skills people could transfer to railway modelling, there's probably more than some people might imagine.

However, despite personally being more into OO and HO scale Diesel and electric railway modelling, I'd make similar observations about decent railway models in other scales and gauges - yes, even steam.

As far as I'm concerned, good models are good models, even if they're of subjects or in scales I personally don't favour.

This might explain why, at various times, I've even considered joining the Gauge O Guild - despite not tending to build models in O Gauge - but don't worry - there is madness in my method (or is it the other way round).

Some of the material that I've seen in their virtual shows (and real shows, when they existed) has given me ideas. The same is true of some of their magazines (which I've sometimes seen at shows).

OK - I also happen to know a few Guild members (I'm not naming names) - people who've given me a lot of encouragement over the years.

Will I eventually join? Who knows? I guess time will tell ... .