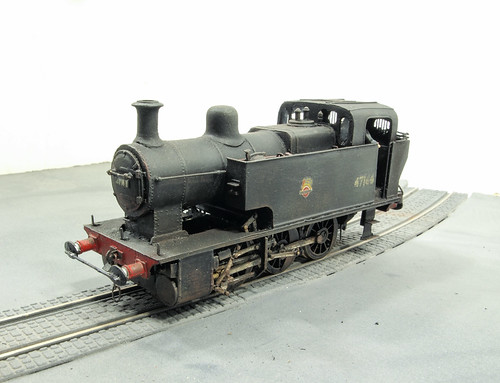 The LMS Dock tank was a challenging kit. An etched brass product from Mercian Models, it was probably a bit beyond my skill level when I took it on. Despite this, it eventually became one of my favourite models.

The first challenge was to roll the boiler from a flat sheet. I messed that up and so looked for a  bit of tube the correct size. The nearest I could find was too small, so I wrapped it in several layers of Plastikard using superglue. With the smokebox wrapper fixed the same way and then chimney and dome glued on, you can't tell on the finished model.

An interesting design feature is the cab roof. Designed to allow the centre section to unclip, I could never make it work, so more Plastikard.

The chassis was expected to be trouble, but as I recall (it was many years ago), once I had it square, the waggly bits were no worse to build than expected. The short wheelbase means less frame supports than I might like, but that's the prototype for you. 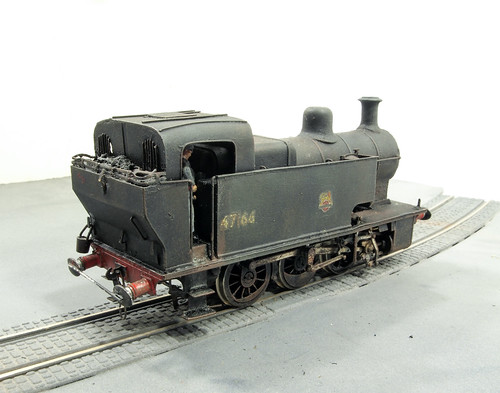 I really must straighten out the coal rails!

Anyway, sorting our the pickups too several shows until I was happy, but eventually, I got a fine-running model that really looks fantastic. The lesson is that with perseverance, it's possible to overcome problems and find alternative solutions.

Eventually, you pick up more skill and since building this model, I've built two others, including one in HO. Being able to roll a boiler helps, but I never made that cab roof work as intended. ]

I'm always surprised this loco hasn't appeared as a modern RTR. It's a handsome beast, but perhaps the valve gear puts manufacturers off. That's fine with me.

Good point that this would make an excellent RTR model. I loved my old crude Minitrix one.