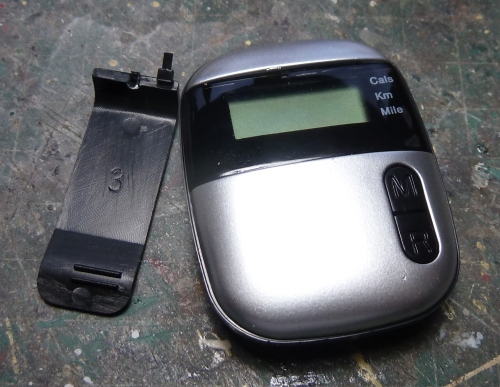 I've been competing with a friend over the number of steps we take each day. I usually lose, and one reason is that I record mine on a 'phone and she has a smartwatch. If I don't carry the 'phone, the steps don't count, and I don't carry it around the house. I am not a 12-year-old girl.

So, my friend presents me with a pedometer in an effort to even things up a bit. That and she'd ordered a batch of them as a corporate give-away. I clipped it on my belt and it started counting.

A couple of days later - disaster.

If you try to read the thing while it's clipped to you, the correct method is to remove the device from your belt. Try to twist your belt to see the screen and you'll break the plastic belt clip.

Hmmm. I needed to fix this to avoid embarrassment. 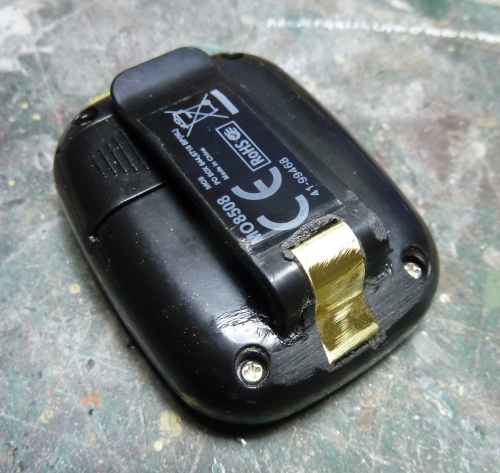 The plastic sticks pretty well with an ABS solvent. I've no idea what it is, but softer than ABS. The resulting join isn't really strong enough, so I bent a piece of brass and melted it into the join with a soldering iron. Still unsure, 2-part epoxy was slathered over the join.

The result seems to stand up to general use, especially since I learnt to unclip before reading. 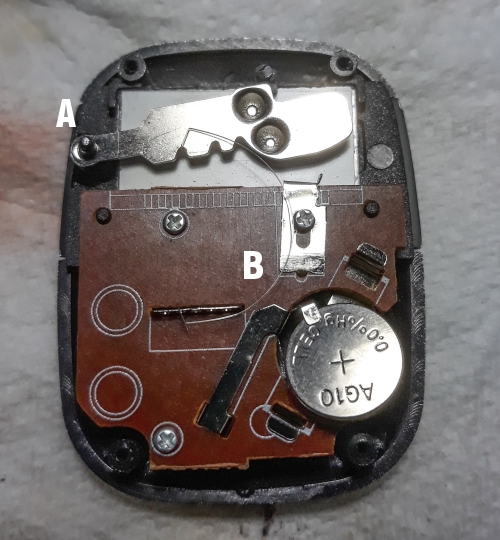 Of course, I couldn't resist a look inside, and managed to do even more damage. The device works by a swinging hammer thing bouncing around as you walk. Somehow the pivot at A had broken off, so I stick it back with superglue and then drilled the plastic pillar out so a Peco track pin could be inserted to add strength.

The tricky thing is the spring - B. This needs to be set to a not too strong and not too weak position. That seems to be the mid-point on the bottom fixing. Too strong and it doesn't record steps, too weak and it records too many. I was tempted to leave it in the weak position to raise my count, but felt too guilty.

The good news is, my step count around the house is usually at least 2000, putting me in contention for the daily win if I take a proper stroll as well.

You might argue that I'm wasting my time fixing this as it probably costs about 50p. That might be true, but I like the challenge, and anyway, throwing things away when you don't have to, seems such a waste.

I'm not sure your step count can be trusted now you have tampered with the device!

It is one of those repairs where I might have been tempted to use one of the mouldable plastics, like Sugru. It is not something I use very often, apart from making handles for tools but every so often it is perfect, for instance repairing lawn hose nozzles.

Never thought of a modelling use for it though.