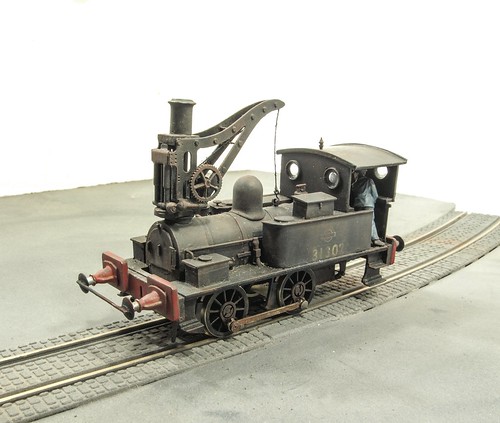 Once upon a time, I was exhibiting at a model railway exhibition, and I spotted a brand new kit for a crane tank. By the end of the show, my expenses had been recycled into the traders till, and I was the owner of a new box.

Crane tank kits are rare. I can only think of this one from Wills Finecast, and the Backwoods Miniatures version no longer available.

Of the two, this is the easier to build. Modern (then) whitemetal castings can be glued together for the body. There are etched parts in the crane, but superglue will do the job. 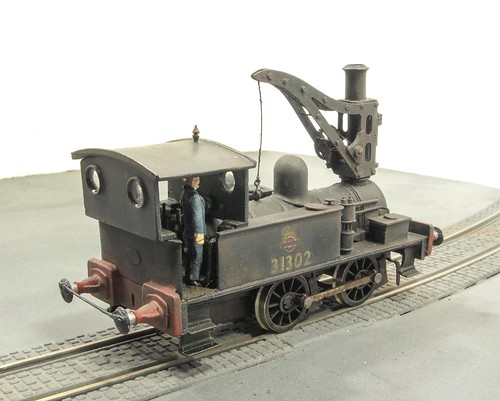 It's underneath where things get interesting. Like the Y8, tiny wheels mean the final drive cog is also titchy, and the model have a 20:1 (I think) ratio.

Worse, the rear overhang is massive. On the prototype, this helped balance loads being lifted. On the model it means the front end can lift and the loco "wheelie" if you aren't careful with the control knob. Some sort of double-reduction box would be good, but the boiler is also tiny, so packing everything in would be a challenge.

If you are going to do that, replacing the whitemetal cab back with something etched would also help move the centre of gravity forward usefully.

Despite this, I can shunt with the crane tank, but it tended to be for showing off rather than because it's particularly suited to the job. Not to worry, it looks terrific in the display case and always attracted attention, which made me proud of my efforts.

Phil, a kit for this SECR Neilson crane tank is also available in 7mm scale from Roxey Mouldings (usual disclaimer). This kit originated in the range of Locoshed kits produced by the late Ray Rogers in the 1980s/90s. I built one about 30 years ago, it had a whitemetal body and brass chassis and was very easy to construct; recommended for a first foray into 0 gauge loco kit building.