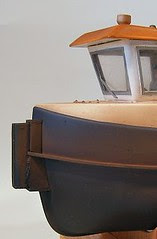 tomsk front
Originally uploaded by Phil_Parker.
Tomsk will be very different from most model boats. He’s going to be dirty. Not a little grubby from handling but properly dirty - just like the prototype boat would be if it existed.

Looking at most boat shows you will find lots of models whose owners would be horrified at the concept of weathering them. Many still can’t get their heads around the idea of using matt paint and insist on finishing warships and working tubs in gloss.

Coming from the model railway world this seems to be the thinking of the early sixties. All the religious debates over weathering or not have been finished, with the general acceptance that if you want a model too look right, it needs to show signs of wear and use. Basically paint what you see not what you want to see. There is still a place for the “ex-works” item but not on anything that claims a shred of realism. Anyway, a high gloss finish is much harder to get right than something less pristine so the pragmatists have their way…

The best way I have found to get the level of dirt I want is to airbrush on lots of coats of very thinned paint. That way the grime builds up in a controllable way. I use thinned rust, rust brown, dark brown & grey. These are randomly sloshed into a paint cup full of thinners and sot at the model. I did my best to keep the glass clean as the skipper would see to this. The hull though got a real blast. You can still see it’s blue but not very.

Perhaps I have gone too far but I like it and on the water I think the end result will be pretty realistic.
Posted by Phil Parker at 6:32 PM