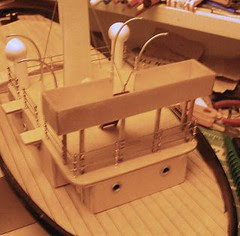 flying brdge
Originally uploaded by Phil_Parker.
My Dad makes wooden boats. He’s currently working on a tugboat based on a plan that pre-dates me by at least 20 years. It’s so old that radio control isn’t considered and a Bassett-Lowke motor is the suggested powerplant.

One of the more interesting features is the flying bridge. Rather than a conventional (for now) enclosed design this is little more than an open platform on sticks. It’s a bit like early Clyde Puffers which offered their crews no protection from the elements. Heaven knows what life would have been like onboard in anything other than nice weather – or in the case of the Clyde, 360 days of the year !

Holding this bridge up are 6 lengths of square brass tube. Originally these were epoxy glued to the boat top and bottom. A gentle nudge against the side of the pool on the maiden voyage broke most of these joints so a new plan was needed.

Aged brainpower not being what it was, the model comes to me to sort this problem out. I added a central core from wire, which sticks out of the top of the tube, and through holes in the bridge floor. Also, I actually studied the plan properly making me realise I could get away with soldering the uprights to the handrails. As these are well fixed down I think this should take the odd knock.

The model itself is looking lovely. I appreciate that this picture, taken indoors with only an incandescent light bulb, doesn’t do it justice. Removing the strong orange colour cast from the bulb hasn’t helped either ! When I get the boat for painting I’ll add some better pics.
Posted by Phil Parker at 9:18 PM