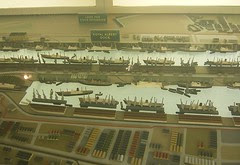 london docks
Originally uploaded by Phil_Parker.
This isn’t one of mine, it’s a small part of a fascinating large model showing most of the London dock system in the late 1960’s. You can find it in the ship gallery of the Science Museum in London.

The model is over 20 feet long and shows just how huge the system was. I can’t image this sort of industry in the centre of the capital, but it was there – I’ve seen the films and the photographs.

I was in London for a meeting that finished at 2pm, so rather then rush home I took the tube down to the museum for no better reason than it was free and I haven’t been there for years. Once you get away from the crowds who seem mostly interested in the shop, it’s great. Better still, in the older galleries such as the one with the dock model it’s like a proper old-fashioned museum. Lots of display cases with exhibits in. Many of the captions are over 30 years old judging from the wonderful use of a strict sans-serif font and proper plastic lettering rather than something knocked up on a Mac and a printer.

Many of the displays are models, especially in the ship section. In fact there are some of the largest ship models I’ve ever seen there with many over 8 feet in length. Of course these are from the days when a manufacturer or owner would commission a model as well as the real boat. Then they’d need the space in the office and offload the thing to the museum.

The best miniature work was reserved for the tractor (OK, history of farming) gallery. I have no idea who built them but they were superb. Even the figures were superb quality, pretty unusual as the models tend to be built by engineers rather than artists.

All this makes me think – our models are often historical documents as well as interesting items. Sometimes the only way you can appreciate a prototype, such as Londons inland port network, is in miniature. I just hope that no-one decides an interactive multi-media display isn’t a better use of space than this amazing relic though.
Posted by Phil Parker at 8:30 PM