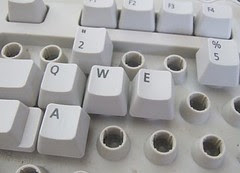 keyboard
Originally uploaded by Phil_Parker.
Does anyone else clean computer keyboards ?

Mine has been getting murkier and murkier, but since it’s a gradual process I hadn’t really noticed. It’s often like this, look at some else’s keyboard at work and see how revolting it is. You’ll be amazed at the levels of grime that people are willing to put up with.

At work it’s cheaper to replace a keyboard than clean it properly. I know you can use wipes and giant cotton buds but let’s face it, you only do it to avoid working and unless you are really fastidious it doesn’t really work properly.

No, the only way to clean a keyboard is to take it to bits. The keys were all flipped up using the screwdriver bit on my penknife. Then they were washed in the sink and left in the sun to dry. While that happened I vacuumed the dust, dirt and bits of food up from where they had been hidden. A paintbrush was employed to disturb the dirt where the suction wouldn’t do the job on its own.

Finally the keys are popped back into place. Being a touch typist would help but I’m not so I started up Word and poked at keys with a pen to work out what went where.

Result – a keyboard that is as good as new. Cost – nothing but time. Much more eco-friendly than listening to James Blunt singing…
Posted by Phil Parker at 6:53 PM

Email ThisBlogThis!Share to TwitterShare to FacebookShare to Pinterest
Labels: hints'n'tips