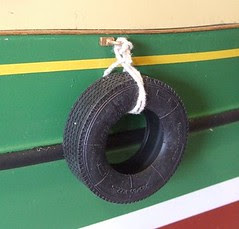 Fender
Originally uploaded by Phil_Parker.
Once the “handles” had dried out I carefully plotted the position on the side of the boat and drilled the fixing holes. The castings were then attached with superglue. To ensure correct positioning on the hull I made a up a little jig – a plasticard off-cut with a hole drilled in it that was placed under the top rail for each fixing.

The tyres are from a model shop in York. The looked about the right size and were nicely moulded. A feed pip was trimmed with small sharp scissors and then I dry brushed the rubber with dark grey (Humbrol 67) to stop it looking so shiny. In the raw it looked like I nicked them off a toy lorry !

Tying them on was fun. My stock of coarse string was limited so I had to be as economical as possible. The tyres are set at the same level as the rubber rubbing strip as this looked right. All the knots were soaked in superglue to make sure they don’t come undone or at least I hope they don’t. There are working parts, the paint has already taken a few knocks so these fenders will serve the same purpose as on a real boat.

The artist in me likes the ugliness of the fenders, in contrast the rest of the model looks so refined. It’s the same effect as a “beauty spot” on a person. They also help to bring the model to life giving it “texture” and turning a model boat built from a kit into a model of a boat.
Posted by Phil Parker at 6:53 PM