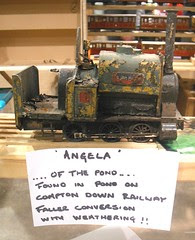 This is the last year that the 16mm Association will be holding it's AGM at Stoneleigh Park. Next year's event takes place at Peterborough. That means instead of a 15 minute drive, it's going to take a couple of hours. I still think I'll go though.

As far as garden railway shows go, this is it. Everything you want under one roof. General traders, specialist traders, steam engines, wagons, coaches, RTR, kits and scratch building parts. Goodies made in clay, steel, concrete, brass, wood and resin. And there are some static displays and layouts too.

A particular highlight for me, other than the new IP Engineering Manx Van and chatting to the legendary (in garden railway circles) Tag Gorton, was being able to see rolling stock from the Compton Down Railway. If you aren't a fan of old model railway magazines then this won't mean anything to you. For me though it was one of the most interesting garden railways ever built. As a youngster I liked the idea that a lot of the rolling stock was scratchbuilt on to cheap chassis. The standards looked achievable but the overall impression was of a real railway, but in miniature. That's not surprising really, because Peter Jones was having the same problems I was at the time, lack of money but loads of ideas. Unlike me, he headed out to the garden and stuck at building his own, self contained line.

Time has not been kind to the locos, but that doesn't matter. Someone built these for his railway show their origins and that is a good thing. In a hall where you can hand over 2 or 3 grand for a lovely live steam engine, models made of bits of wood and metal on a Hornby O gauge chassis show that this is a hobby for everyone.

More photos on Flickr
Posted by Phil Parker at 6:27 AM

There must be millions of people around the world who are modelers of whatever breed and it must be a profitable business given the number of companies who cater for the various markets. As for railway modeling there seems to be a healthy number of shows around the UK and the rest of the world. The question is, is the number of modelers increasing or steadily declining and how to introduce more people to the joys of the hobby.

Over the last few years I have been running painting courses here in the south west of France. The clients are generally ladies of 50+, the people who have the time and money to indulge in their chosen hobby/passion. They range from the not very good to the almost professional (some better than me!) but what they enjoy on the course is companionship and a period of time when they don't have to worry about shopping, cooking or the children/grandchildren and can concentrate on what they really like doing. I would like some government money to help me on the courses and although the French are very supportive of the arts at the grassroots level, just imagine the bureaucracy!! Not having indulged to any extent over the last few years I do not have the skills to run courses but maybe someone else could - we have the accommodation. Unfortunately the hobby seems to be virtually non-existent here. Also there are no full size steam railways either but we do have the highest railway in Europe at Artouste in the Pyrenees.

Railway modelling has for some reason, a bad reputation in the UK but so have computer games players especially role playing ones. At least you know the people who attend exhibitions are at least interested, - maybe the clubs and Associations could do more in publicising the benefits of the hobby. The model railway magazines and bloggers such as Mr Nevard and your good self are doing a great job in spreading the word - your reward will come!