Book Review: INSIDE a diesel locomotive 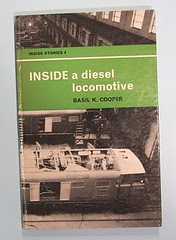 I picked this slim, hardback book while browsing a stand at the York exhibition last week. For the princely sum of £1 I became the owner of one of the more unusual books in my library. Published in 196 by Ian Allan Ltd, this looks like the sort of thing aimed at the younger end of the market. If it is, then it can't have been a best seller.

The first chapter "How a diesel engine works" starts:

Both steam and diesel locomotives draw thier power in the first place from heat. There is no sign of this in looking at a diesel, for the heat is generated inside the engine itself. Anyone who has pumped up a bicycle tyre knows that the pump barrel gets hot. Idoes so because the air is being compressed by the piston. In a diesel engine the moving pistons compress air inside the cylinders, making it hot enough to "fire" a fine spray of fuel oilwhich is pumped in at the right moment. Imediatly, the space above the piston in the cylinder is filled with hot, expanding gases which "enlarge" the narrow space in which they are trapped by driving the piston to the opposite end of the cyclinder. The diesel therefore belongs to the class of engines called "heat engines".

Those are the first words in the book ! There's no messing around here. By the end of the book, if you have been paying attention the reader will be able to understand all the principles of not only the power plant, but most of the ancileries. Bothe diesel-electric and diesel-hydraulic transmissions are considered. Diesel-machanical gets less coverage but you will know how a dog clutch works and have ploughed through many pages of diagrams. Pick up a lump of steel and you can probably whittle yourself a working railway locomotive using only a swiss army knife.

I'll be honest, I skipped to the back of the book and had a good look at the section on Bogies and brakes where there is this excellent diagram:

Now I have an idea exactly what I'm building when working on the Class 26 bogies. As far as model making goes, all those springs are just for decoration. Now I have some idea of what they do, the rather confusing collection makes some sort of sense. This is important if I want to model things properly, or at least it makes things a whole lot easier.

At 62 pages, this is a very complete and concise guide for anyone who wants to know how a locomotive works beyond "A driver gets in and turns on the power" noddy style publications. Worth seeking out on the second hand market IMHO.
Posted by Phil Parker at 2:39 AM

My copy cost £3 so you did alright!

My dear mum bought mine in 1966 and it WAS hard going for a seven year old but it came into its own in my teens when I actually got to move MELD at Gateshead depot in 1975. I knew what to do to move and stop the thing. I was under close supervision and the loco is scrapped, the site is now a flats complex and the crewmne, alas, gone to rest.