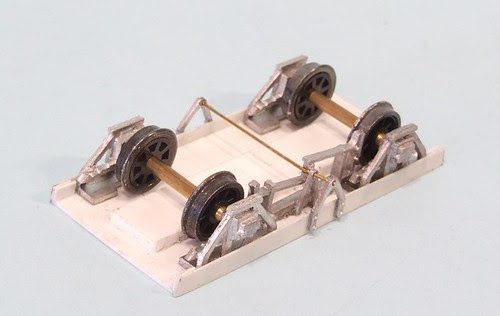 If I have to chose between rolling stock that looks good or works properly, I go for the later every time. Visitors to exhibitions will hardly notice minor foibles such as wobbly handrails or other errors that exercise those on model railway forums, in the context of a completed layout. What they do spot is the things falling off the track all the time.

I can't say for certain that the Manx G Van would have had running problems, I just felt that the way things were going there was a pretty good chance. So I broke the whitmetal bits away from each other and looked for a plan B.

In this case a separate chassis seemed in order. This isn't sophisticated, just a rectangle of plasticard with the axlebox casting stuck to it. With the wheels in and rotating freely and solebar was made from very thin plastic. A little thinning of the body casting allowed this lot to drop into place. The floor makes the model ride about 1mm too high but I can live with that. In fact it's less of a problem than you'd think as with all the bits fixed and dried, I thinned this down by rubbing it on a sanding block.

The brake gear is straight out of the kit. The lever needed to be shortened a bit but a quick snip with the wire cutters sorted this.

Anyway, all the wheels touch the ground and it runs along the modelling board nicely. If I find a bit of 12mm gauge track I'll give it a proper test. 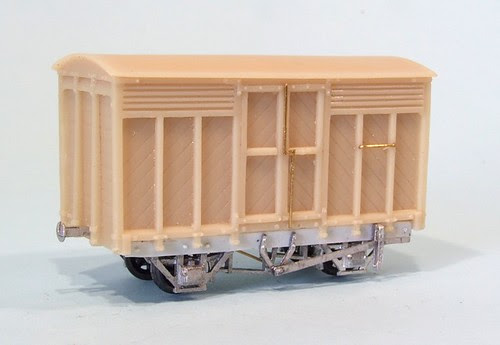