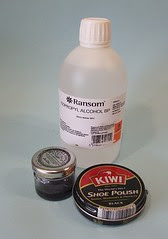 Unpainted wood exposed to the weather very quickly changes from a nice brown colour to a silver/grey. Replicating this on a model is more challenging than it ought to be.

In his book, "The Art of Weathering", Martyn Welch expounds on his methods for man, many pages. It's probably this information that sold the book to most people, quickly followed up by the purchase of tins of Humbrol Metalcote Gunmetal. The results look very impressive and even someone like me can follow them and produce a reasonable facsimile. If you read the instructions properly and follow them to the letter, your results would be even better...

However, there are another group equally skilled - American railway modellers.

As a regular reader of Narrow Gauge & Shortline Gazette, I've seen no end of beautifully weathered wooden shacks. Much of the success seems to be down to some weathering dyes available in the US. I have tried to order these but because of the chemical contained, they can't be shipped.

Not to worry though as the makers apologised and then told me what was in there. A mix of rubbing alcohol and boot polish !

Trawling around chemist shops, it seems that rubbing alcohol has long since been replaced by linaments such as "Deep Heat" but in an idependant shop the pharmasist, who seemed to know a bit of chemisty, suggested Isopropyl alcohol would be worth a try. 6 quid a bottle is worth it for a dabble.

Mixxing the liquid with a little polish in a jar, I painted it on some plywood. Once dry it went silver. Rubbing the mix in gave a more subtle appearance and building up layers changes things further. It's certainly worth a bit more experimentation. 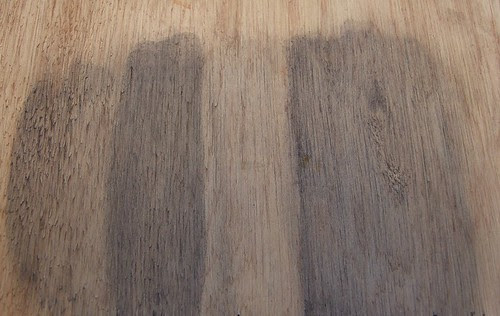 Isopropanol Alcohol has long been a favourite "tipple" of mine; it's a vary handy general purpose solvent/de-greaser.....can also be used as a thinner for acrylic paints, I also use it as a wetting agent for ballast before applying diluted PVA.
Some r-t-r model lettering will also respond to it if used carefully.....I have removed unwanted numbers, etc. from several Bachmann models with it, causing little or no damage to surrounding paint.
Availability can be patchy.......my local Boots looked at me like I had sprouted horns when I asked if they stocked it and a local independent didn't seem interested in getting it for me. Lloyds Pharmacy were able to order it for me, next day delivery.
Simon H.