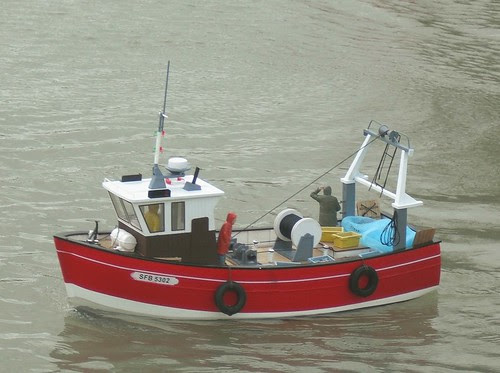 This boat has appeared on the blog before. In essence, it's a ready-to-run modern fishing vessel from Thunder Tiger Models. I like the good quality radio and control gear, the fibreglass hull and well detailed superstructure.

I didn't like being able to see through the grille at the back of the engine bay, or that everyone else has one and they all look the same !

Finally though, my model has been personalised. A George Turner Models Crew are in control. Fish boxes, life raft, tyres, fire extinguisher and a net from Mac's Mouldings complete the accessorising. The wheelhouse was prised away from the deck and an engine cubicle built from plasticard. While doing this I found that the doors and grille are separate mouldings so can be popped out if you want. Maybe to leave the door ajar ?

Inside the bridge the sailor has a floor to stand on and a map to guide him. There's loads of potential here but I wanted to do this quickly so didn't go to town on the job.

The net was "interesting". It's a plastic mesh which as supplied is too springy. Rolling it up and hitting it with the heat from a hair dryer followed by a cold blast sorted this out rather better than I expected. There's still spring but the net now has more of the appearance of a heavy mesh.

On the water, the boat works as well as ever but now I can sail without everyone thinking I'm a chequebook modeller. 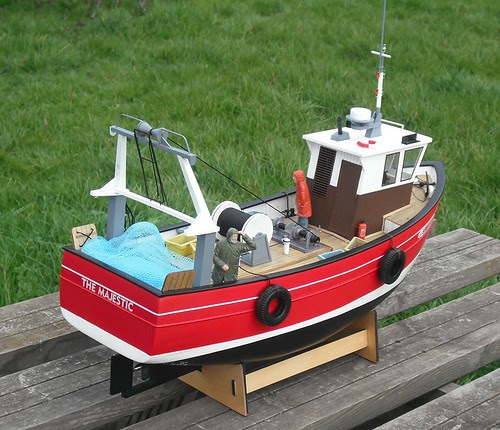 Quite a few members in our club have bought these Thunder Tiger rtr boats and they all seem to run very well, as you say there are lots of ideas for deck clutter and personalising them.
Always checking out your blog, its the bees knees