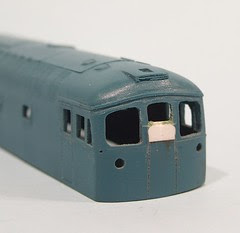 Starting work on the Class 26 diesel, I get to make progress on the biggest difference between the Class 33 body and the loco I want to build - the nose.

As far as I can tell, the main change required is to add a set of doors in the middle of the face. These stick up into the windscreen, reducing the middle window by half it's height. For this I squared off the bottom of the window and made a plasticard door top. Above this is a bit of microstrip for the window frame. The construction was glued in place with superglue and left to set. Once dry, the area was filed away in an effort to loose the join.

Next, there was an odd line around the windows that extended back down the body. I suspect this dates from the era when plastic ridges were used to delineate the paint lines. You can see this on older models where there are odd ridges and lumps visible when the BR blue livery has been applied. You even see moulded square brackets to show the position of nameplates even when they aren't fitted. Back in the good old days, detailing articles were full of instruction to pare these lines off as a starting point to improving your model.

The other change to the nose is the back dating of the marker lights. The photo I'm working to show a couple of fixed lights and several discs. I've removed the moulded lumps and drilled the holes for the former. The later will appear a bit further down the detailing route. In the meantime the whole nose has been lightly sanded and the door sides marked with an Olfa Plasticard cutter.
Posted by Phil Parker at 1:15 AM