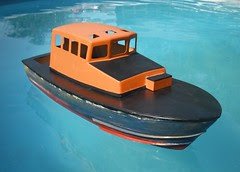 If you've been reading this blog for a very long time then you might just remember that I started building a Brede Class lifeboat. The model currently has a scratchbuilt hull, which I'm very proud of, some electric gubbins and a few castings. Apart from that there's not been much progress for a longer than I care to think of.

It seems I can't escape the class though, because a few weeks ago, I was offered a 1/12th scale kit for the same class. Actually, someone tried to place an advert in our boat club newsletter and as the editor (read: bloke who does all the work on the thing) I learned about it before anyone else. The boat was described as part started which is always a cause for concern, but the price looked promising so in a car park at one of our boat club meetings, a deal was done.

The model turned out to a good 'um. It's a Models By Design kit, well set of assembled mouldings. The propshafts and rudder tubes are fitted. Some painting has been carried out and the windows holes are started. My Dad took one look and decided he'd like to have a go at this one, which suits me as it means I have to do less work to finish it off.

Checking the work so far, it all looks OK. The prop tubes are nicely parallel. as are the rudders. The later aren't in line with the centre of the propellers by an amount that would indicate this is a deliberate step rather than accident. Rectifying this would be an awful lot of work so I'll see how the model handles before deciding.

Despite being a small prototype, this is still a chucky model. My 1:20th size version is a lot easier to handle. Still, it is on the upper limit of being easy to move even if it does take up a lot of space on the workbench.
Posted by Phil Parker at 2:13 AM