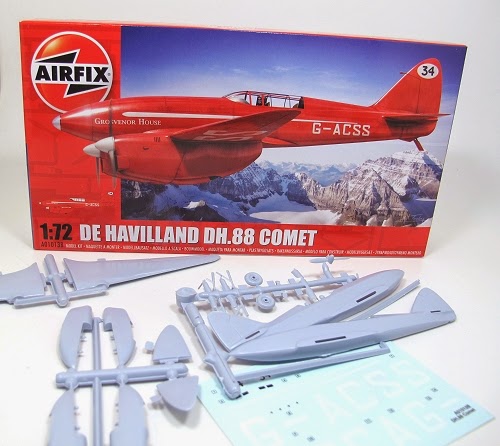 So, I'm browsing the Airfix "Black Friday" sale and spot this rather nice looking aircraft for under 3 quid in the selection. Well, I'm buying one or two other bits so I add it to the basket.
While I have a million other "proper" projects to finish, I fancy this as a bit of a quickie and a useful test. You see, this 'plane needs to be painted properly. Gloss red. With perfectly applied transfers. I'm not sure if I can do this but I would like to try. Anyway, it's a break from the soldering.
First up, stick the kit together. If I'm honest, I though this would be a quick job. I hadn't counted on an old kit with terrible part fit and hardly any locating tabs. Nothing between the two halves of the fuselage anyway.
Lashings of liquid plastic glue later (apply, push the joint hard together so a little plastic oozes out) and I've done it. The wing tabs had to be trimmed to move the leading edge somewhere near where it should be. One tail fin was a lot higher than the other but making the locating slot deeper sorted this with filler covering up the badness. Air intakes on the front of the engine nacelles are little more than ragged holes but I tidy these up a bit and will live with them.
﻿ 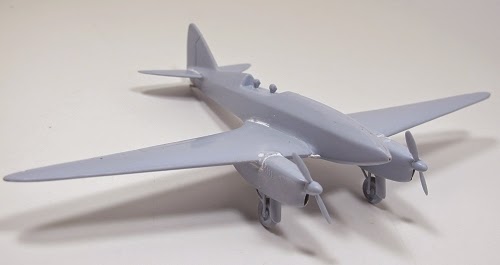 Annoyingly (to me) you can only build the model with the landing gear down. I quite fancied an in-flight version like the box top shows but then I suppose there isn't a stand supplied so that wouldn't work either.
Posted by Phil Parker at 5:30 AM

Their 1:32 Ford Escort kit is just as good - no easy way of working out how to position the rear parcel shelf - and the outside of the rear pillars / wings need a lot of filler.

Just the sort of thing to encourage kids to have a go at kitbuilding - and modelmaking in general.