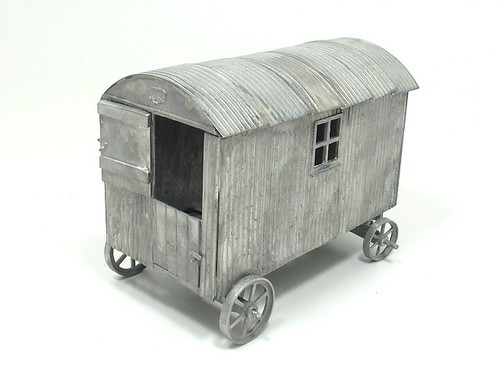 A little queue jumping now. While the Adams Radial awaits a little finishing and then paint, I'm reminded that I promised to build a Duncan Models shepherds 7mm scale hut for the NRM. A start has been made for a little video work but it was no way finished.

A couple of hours low-temperature soldering later and things look a lot more complete. The kit isn't too tough. The sides are big slaps of whitemetal and once you work out which way the undercarriage goes (Hint: arms for pulling at the opposite end to the door) it tacks in to place.

The roof is made up of metal sheets (Ambis Engineering?) that have to be bent and then trimmed to length. These were soldered with C&L 100 degree solder. Not sure what they are made of so I was pleasantly surprised when the solder took to them. I ran a bead along the outside of the sides under the eaves as the framing for the undercarriage gets in the way inside. Sheets are overlapped but as you only just get enough material, it would be better to but joint them as I only just reached the ends of the body.

Cleaning was with a spray of Cillit Bang rather than Shiny Sinks. It's easier to get into the inside corners with this and in theory, the degreasing performance should be excellent. To paraphrase Barry Scott - "Bang! and the flux residue is gone!"
Posted by Phil Parker at 5:30 AM