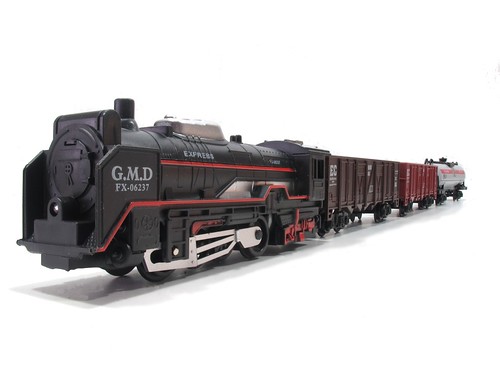 If yesterday's model was nearly described as a "Terrible train set", how about todays effort? Surely this thing has got to be beyond the pale?

It's true, the "Rail King Intelligent Classical Train" doesn't have some pretty important limitations. Even it's greatest advocates will be hard put to pin down a prototype, no matter how much the box describes it as a "finely detailed realistic toy train".

Let's be honest, it cost me £4.99 in one of Leamington Spa's less salubrious Christmas shops. I have a feeling that even this price might have dropped a bit by now. In the box is a loco, two bogie open wagons, a tanker and oval of plastic OO track with what looks like about code 200 rail.

Simple, I'm always advising people to practise painting and weathering on old models or those acquired from the deepest recesses of the boxes found under second hand stalls. If you don't have access to one of these or simply can't bear to damage some 1970s Hornby Silver Seal collectibles, then here's the alternative. 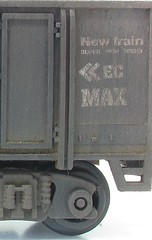 Ignore the loco and the wagons are pretty well detailed. Not authentic in any way but there's some lumps for detail and they are vaguely train like. At this price, there's loads of scope to b****r the whole lot up and yet not to care. After all, when the paint and powder costs more than the base model, it's hard to worry too much.

So, modellers of the world, get yourself down to shops selling tat and purchase one or more test models for practise. Extra kudos for anyone who slips some P4 wheels in...
Posted by Phil Parker at 5:30 AM

The loco seems to be very, vers loosely based on a japanese design (http://korschtal.wordpress.com/2011/09/17/kyoto-steam-museum/)

I expect that these sets are doing the rounds in Japanese living rooms at this very moment and will continue to give joy to children until they fall apart a week on Tuesday.

Meanwhile I can't get bogies and wheels for less than silly money here.

Thanks for posting this. It's actually a fairly good model of a Kawasaki JNR class D51, 2-8-2 Mikado, which is the basis of the "Hiro" engine from Thomas the Tank.
This is one of my son's favourite characters and not available from Hornby or the Bachmann US range so I was looking at a conversion of a continental 2-8-2 HO model.. If I can find one of these to put on top of the chassis it would save a lot of work.
Did you pick it up at a chain store?
I have to say its a bit sad I know so much about a TTTE subject but he and my two boys obsession with him is the reason I have started railway modeling after a 30 year gap.. Off to Thomas Land now! Yes really in Staffordshire. From Devon!

Mark - Not a chain store, just one of these op-up shops that fills empty in-town units areound this time of year. I've seen a similar set in Wilko though. Some sets include a tender with the loco but not the one I have. There are also 4 different wagon designs and coaches. Gauge is OO although the wheels are very coarse but might be ameanable to attacking with emery paper in the short term.