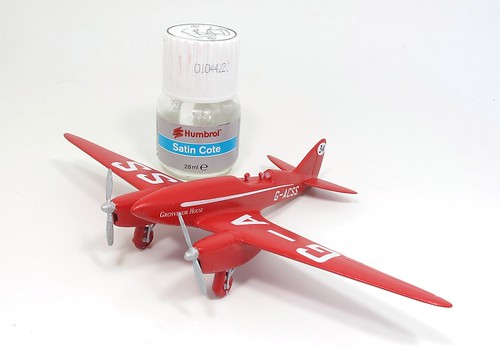 I'm pleased to report that the transfers were quickly applied to the aircraft and sat on the gloss paint with hardly any trace of "silvering" caused by air being trapped under the sheet. In fact, the tiny amount that did didn't show itself until I started blasting the model with a hair drier while varnishing. The heat presumably expanded the miniscure spots of trapped air making them visible.

One entertaining feature was the registration number. This is G-ACSS and so the transfers have it, except the one for the bottom, which if used as supplied, will produce G-CASS. A little scissor work sorted that out but you do wonder how it made it through proof reading.

Transfers on, I sprayed the model with Satin Cote varnish to tone down the sheen. I don't like gloss models, they look too toy-like to my eye. All went well initially but then I spotted, horror of horrors, a run.

I know from experience that dabbing a cloth in this to remove the excess varnish will ruin the finish. The cloth tears at the surface of the paint and the only solution is a strip and re-paint. With all the transfers, this wasn't an option and quite frankly, for the price of the kit, it would just be easier to chuck it away.

Thinking back to a trick George Dent has suggested in his airbrushing book, I tried a waft more varnish hoping the thinner would mix with the run and spread it out. This didn't work but then it occurred to me to try wiping it with more thinner.

Dipping the corner of my kitchen towel in the turps, I gently stoked the run several times and it gradually disappeared. Another quick waft of varnish and you can't see anything bad has happened at all.

I'm doing this to learn more about painting, and that last trick is one that makes all the effort worthwhile. I can see myself saving a future project this way.