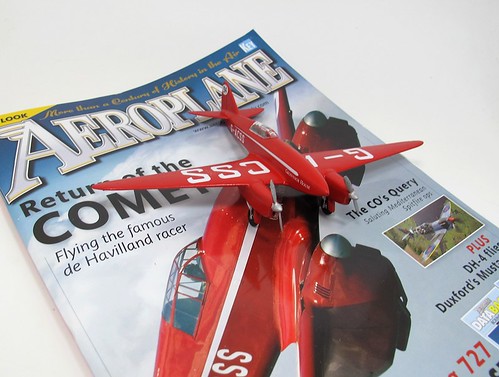 How's this for coincidence. Just as I'm messing around with the Comet paintwork, in Smiffs is a magazine with the very aeroplane on the front cover. Of course I had to buy a copy - not something toy train buffs normally do (Buy a non-model railway magazine, are you mad? There is no world beyond the train set.) but I like to look beyond the hobby occasionally. Beside, my Dad likes to have a read and he's to stingy to buy a copy for himself. I was tempted to wrap it up fro Christmas.

Finishing touches include some glazing bars drawn the on the canopy using a Bob Moore lining pen. They aren't perfect but then the clear plastic part is a bit wobbly itself. The horizontals are straight thanks to my trusty ruler, even if not in the perfect position. Verticals are short and done by eye as I couldn't be bothered to wait for the other lines to dry.

Having said this, the pen worked perfectly, showing how good it is with gloss paint.

Finally, the canopy was stuck in place with canopy glue and the model pronounced finished. Were the panel lines more pronounced, I'd liked to have had a go at a little weathering, although the prototype always looked pretty clean.

Talking of the prototype, after success in the 1934 MacRobertson Air Race, the aeroplane enjoyed a slightly chequered career mostly involving the undercarriage several times. Fortunately, it can now be seen as part of the Shuttleworth Collection.

One interesting story is that in 1938, the owner was contacted by a Jewish group with a well thought out plan to use the plane to bomb Hitler during a ceremonial parade in Berlin. A £1million price was agreed but then pilot Coulson decided against it for fear of what the British Secret service would have done once they worked out who had carried out the deed. One owners how history would have changed if he hadn't.
Posted by Phil Parker at 5:30 AM

Email ThisBlogThis!Share to TwitterShare to FacebookShare to Pinterest
Labels: aircraft