How green is my hut on wheels? 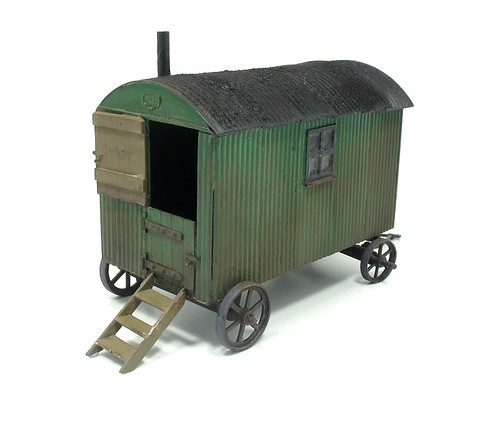 As far as final colours for the Duncan Models shepherds hut, the box shows a green body, black roof and undercarriage, which all seems pretty reasonable. It also shows a white window, which is considerably less likely since white gloss paint is a relatively recent innovation.

In my mind there is a municipal green that the your towns Corporation painted everything in between about 1920 and 1970. Lawnmowers, railings, lamp posts, road rollers, and engineering equipment etc. it was all painted green. I'm sure there is a proper paint code but Railmatch 307 Early Multiple Unit Green looks pretty close and more importantly, I had a spare bottle slowly going off on the shelf.

The body was brush painted. Railmatch paints are much better sprayed than brushed in my opinion as there isn't enough pigment in them to cover in a single hit so you need to build up thin layers - ideal for spray and I've had really excellent results when applied from the airbrush. Here though, the brushing left the primer showing through slightly, which is exactly the look I was after. This isn't a new hut after all. It's been painted with whatever came to hand, in this case a couple of pots "acquired" from the local council.

The same companies (Railmatch, not the council) weathered black did for the underpinnings. This does have loads of pigment so brushes very nicely.

On the roof I wanted it to look like a pitch had been applied so I painted a thick coat of Humbrol matt black and then dusted some talcum powder in it. The talc soaked in so I gave it more until the paint was all absorbed and finished off with black weathering powder. It's odd, but when you want something to look like it's been painted with a tar brush, this proves harder than when you don't.

After all was dry, a wash of thinned track colour, a little dry-brushing with rush and metalcote steel followed by a dusting of mucky brown weathering powders and we are ready to go.
Posted by Phil Parker at 5:30 AM

excellent - you need an old shepherd in a mock leaning out of the door smoking a clay pipe but maybe life's too short!

For 7mm scale it is. I do have a 16mm scale version waiting and there IS a shepherd for that one!

These things are not necessarily as old as all that (smocks, clay pipes, etc.)
They were also popular with road gangs as living vans. I know a young chap who spent his honeymoon in one that had just been built for him. Earlier this year!
Nice job. I do like the roof treatment.
Has the same look as old asbestos.

Good point about the asbesto. Change the colours and the technique would work well for that too.

Phil, re the municipal green paint- so very true, so forgotten today and so well remembered and observed. Newcastle Corporation as was was covered in the stuff- primary schools, the huge Greenmarket, railings, lamposts, the lot.