This week saw Hornby announce their 2015 range of models. As usual it's been a cause of much frothing on-line with modellers busy reviewing each and every model, even if they haven't progressed much beyond a set of CAD drawings.
The men from Margate aren't alone - all the manufacturers like to warn us about future products so we can start saving our pennies. The announcements are also reviewed by the hordes every time a prototype or early test shot appears. Over at Albion Yard, Paul has commented on some issues with DJModels 02 test shots (Calmly and sensibly, there's plenty of loony tunes out there but I'm not linking to that. Besides, he's bought me beer in the past). Even I've spotted problems with the same firms J94 and it's injector attached to a fictitious paving slab.
Now, the idea behind a lot of the more measured criticism is that the manufacturers will take notice and refine the finished product. Personally, I rather they didn't because a lot of these are easy fixes for modellers.
As an example, look at the Hornby J50 prototype above. It will have nice wire handrails and a separately fitted smokebox dart. I think this is a great pity.
For my money, how about a body that is scale, a good quality chassis and then some moulded on bits.
This way the cost will be kept down (not enough for the Internet loonies but still down a bit), the loco would fit in the "Railroad" range and even some train sets.
Oh there would be cries of anguish. Everyone knows it a HUMAN RIGHT to have separately fitted handrails on a toy train after all.
But - if you want to upgrade, you could. Nothing very difficult here and at the end of the day, your model would look better than one untouched.
I'll suggest (and yes, I am being deliberately controversial) that high quality RTR is robbing modellers of the chance to do some modelling. The top end stuff is so good that only the best modellers can hope to match it. So, people don't fiddle with it and since there is no easy way to get started with modifying a model they don't take that first step.
We've even reached the stage where people are paying to have real coal added to the bunkers or tenders. The simplest improvement you can possibly make to a model steam engine and yet it's a service bought in "In case I make a mess of it. It's just easier this way."
Still, the genie is out of the bottle. It's too late to go back and I guess we'll have to work out other ways to persuade people to get modelling. In the meantime, I don't need a J50 and if I did, there is a 3mm scale one on the shelf. And I'll always think it is better than the Hornby one 'cos I made it myself. 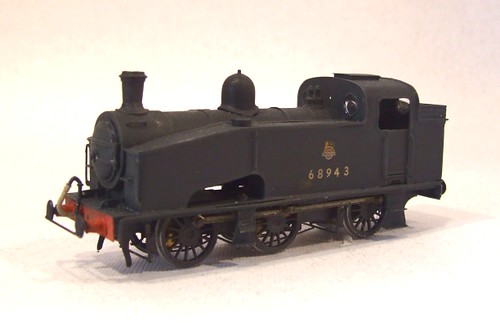 Go on, copy and paste the above into RMweb, I dare you!

What, and generate a tidal wave of fronth?

Thanks for the mention. Its an intriguing thought to not have 'perfect' models' and I understand the value of adding something, even if its only a cup cake before beer. Only one RTR item in my varied fleet has escaped modification, the NRM Deltic, everything else gets worked over. I did start with the Airfix kit/train set/etched kit apprenticeship though and I prefer to modify stuff as little as possible to let me do other stuff, eg drink beer.

TT though, the ideal scale? I think it could have been.

Trouble is, those perfect models are stopping people doing some modelling. When you won't add coal to the bunker, you probably buy ready to use buildings telling yourself they are better than anything you can do.

The time saving is (IMHO) a red herring. With all the time saved through not having to modify/build rolling stock, I'd expect to see lots of brand new layouts appear, but there aren't. My feeling is that it's because people now feel they can't match the standards of the bought in stuff so are scared of trying anything. This is sad.

And TT is brilliant.

You're so right Phil - if we don't have any input into our train sets what, really, is the point, at least for the grown-ups? We just end up with more identical layouts in the Railway Modeller.