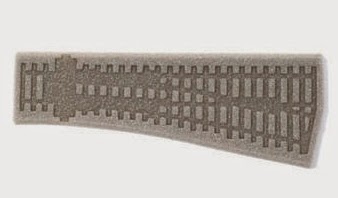 John asks: I occasionally see mention of railway modellers using foam over their base boards before laying track on top.
To me foam is soft and bendy and stuffed into cushions and not very hard wearing so I guess this must be some other form of it.
Can you enlarge please on exactly what it is and how to use it. Can you hide wires underneath or through it to avoid having to pin them under the base board ?

I suspect the foam you are referring too is track underlay. This is a foam strip, usually moulded with an impression of track in the top surface.

Track is laid on to this and then pinned through to the baseboard and gives a representation of ballast as well as providing some cushioning. The foam is medium density so reasonably stiff but will compress if you push it or nail the track down too heavily.

If pinned lightly, the foam will reduce the sound given off by trains but if I'm honest, with modern RTR, it's hardly an issue. The idea you need to reduce the noise is a hangover from a few decades ago when gears ground away until locos were run in.

Underlay has fallen out of favour over the years. I can't recall anyone who has used it and I know I haven't. Granite ballast is cheap and more realistic, but applying it can be messy and if you get it wrong, gumming up an expensive point isn't difficult. Underlay solves this.

If realism is key, it's perfectly possible to use underlay and then cover it with fine ballast. Although I've not done it, I have seen photos and the results can be really effective.

I'm not sure it helps much with wiring although you could easily run fine wires underneath it and let the foam adjust itself around them.
Posted by Phil Parker at 5:30 AM

Some modellers use foam cut from camping mats under their track, probably a better use of the stuff than its intended purpose... (self-inflating mats work far better and giv you a better nights sleep!)

Some modellers use Carrs track underlay as sold by C&L which is a more resilient industrial type of foam as favoured by finescale modellers.