I need a couple of 7mm scale figures for a diorama, so while at Stafford I spent a long while at the Ivertrain stand searching through the little packets of unpainted people.

First I've got a "Heros of the Footplate" ganger. He arrives in two parts - head and the rest. His collar needs to be drilled out to accept the neck attached to his head. There's a shovel for him to lean on too. 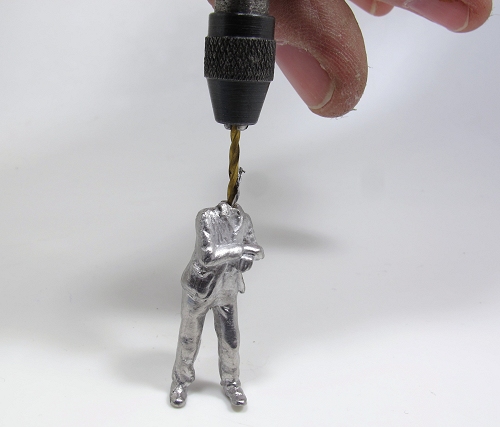 Whitemetal is soft so it's no great trouble. I always work with a slightly larger bit than required so I have the chance to move the noggin around a bit so he's looking in the right direction.

Once happy, filling his neck with superglue and popping the head in place and we are done. He's ready to be glued on the painting stick. 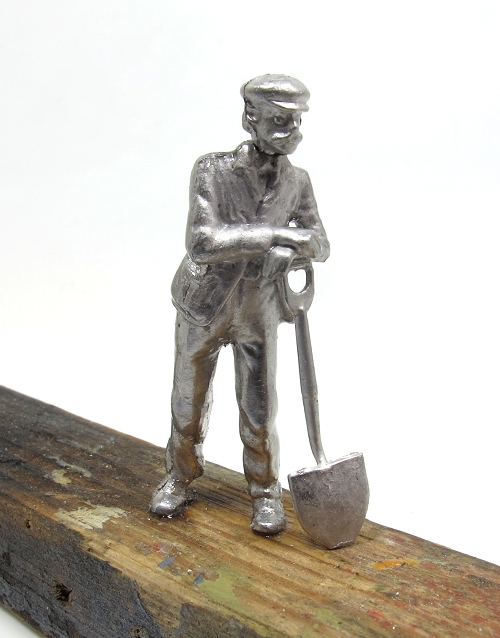 I nipped the tip from the spade so it appears to have dug in the ground under his weight.

From this shot you can see why it's worth priming figures. Spotting the detail, or that seam line round his head, is hard in shiny metal.

My other figure is from the S&D Models range. The seated workman arrives in rather more bits. 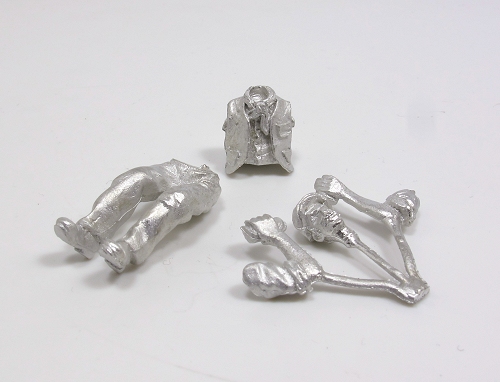 More superglue, but no drill bit action this time. Holding the arms in place is tricky, they hang on stubs emerging from his shoulders so I tend to squirt them with superglue kicker to speed up the drying process before they fall off. 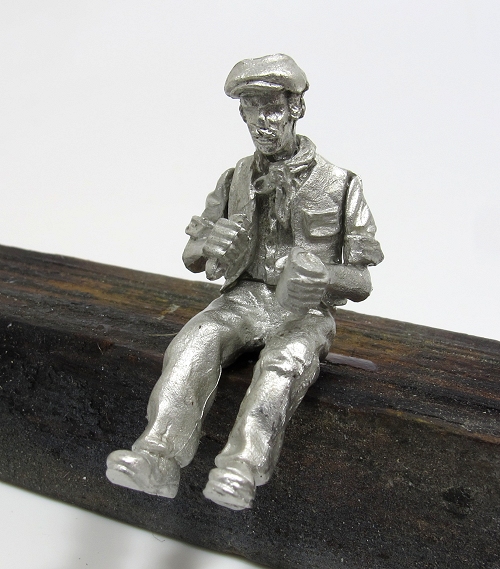 On the painting  stick you can see he is more detailed then the HOTF man. None of this is an issue as for model railway purposes, it's proportion and pose that matter more in the context of a larger scene.

Ironically, I was thinking this when Allan Buttler from ModelU appeared for a chat about a recent DVD appearance I'd filmed for his little people. It seems he is doing some interesting projects, more of which in the future.
Posted by Phil Parker at 5:30 AM

Is that first figure supposed to be wearing a mask or is it a very odd head sculpt?

It's his moustache. Possibly a bit more relief under it would help, but it looks fine from normal viewing distances.

I'm suprised that you didn't come away with some of Pete Goss' figures, which could be found for sale to one side of 'Worlds End' (a fine layout which I spent ages in front of). I came away with a couple of packs of his 4mm scale figures, very nicely sculpted in relaxed poses. There were 7mm figures as well.

I looked but there weren't any unpainted O gauge. Didn't want any 4mm as I have a backlog of ťhese. Spent a lot of time enjoying the layout though.