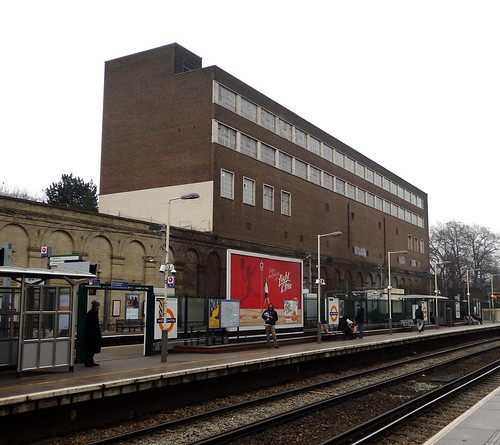 Heading to Olympia from home means changing from the tube to the London Overground at West Brompton. Quite frankly, it's grim. The sort of place where if it isn't actually raining, it is about to start. All the time.

Matters aren't helped by this ugly lump of bricks looming over the station atop some brick arches that probably looked very nice when they were new. According to Google maps it's an electricity substation, but that might just be the electrical stuff beside it. There's no obvious access road and car park for office workers either. There is a handy graveyard though.

As a modelling prospect though, it would be a simple scratchbuild. There's not real detail to worry about other than some gratings. Those windows would be easy enough to do. Basically, if you need an lump of anonymity for the back of your layout, here it is.
Posted by Phil Parker at 5:30 AM