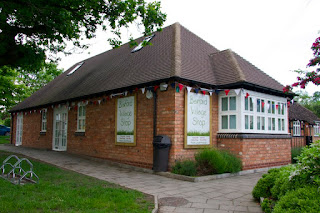 I used to drive by Barford village shop and Post Office every day on my way to work at a horticultural research establishment that is nothing like the one in my novel.

Every so often I'd drop in a buy some stuff. Cake mostly as they had a local supplier perfect for those times when you need something slicable such as a birthday. It was a general store with all sorts on offer.

A few years after I stopped passing, it closed down. For a while it sat empty and now sells 2nd hand furniture that has been badly painted white. I think it's rustic and retro but does nothing for me. Not that I know much as it's been doing this for years.

Barford still has a shop, but it's run by volunteers.

The same thing is happening to many local libraries. I found myself chatting to the owner of a fine moustache last week, he happens to volunteer at a library which would otherwise be closed.

People do this because they think it matters that locals have access to shops and books.

So, should we have community model shops?

I'm thinking a physical shop run by volunteers. A proper shop that sells all sorts of modelling products and offers advice to those coming in the door.

Obviously there would need to be some capital, probably more than many people realise, but that could be "crowd funded" perhaps.

Sales assistants would work unpaid. Not such a daft idea as there are plenty of reasonably newly retired people capable of doing this sort of work who would gain from the metal workout they would get and the social aspect of the work.

It would need to work as a business and as such there would need to be decisions about stock levels - doubtless some of these would result in long drawn-out arguments but others would seem obvious as popular items flew off the shelves.

Location would be determined by the group, but it doesn't have to be in the town centre. It could well be situated in a village as long as transport access was good!

Competing with "proper" stores might be more of an issue. Perhaps being tied to a preserved railway would help (I know some already do this sort of thing) as the funds could be seen to go towards the upkeep of the line. Although it needs to be a BUSINESS first with the idea of not only being self-sustaining but actually expanding.

Modellers are always bemoaning the lack of shops. Maybe it's time to do something about it?

(Apologies to those who read this last week when the post accidentally leaked out on the web due to my not setting the scheduling properly)
Posted by Phil Parker at 5:30 AM

I think this idea has merit, as a volunteer for a community transport scheme, I know first hand the benefits of the voluntary sector both for the users/clients and for the workers. It doesn't neccessarily need to be staffed by older people, it could be just as useful for someone wanting to gain valuable retail skills in order to gain a boost in the jobs market. Competition in the retail sector is fierce and any advantage is a bonus. The only danger with this idea is a volunteer run shop opening up in an area that already has a model shop, removing the overheads of paid staff, means potentially they could undercut the established shop, forcing that out of business.


Another possibility that I haven't seen explored much is combining a model shop with a cafe. Modelling is a very social hobby and so having a cafe to my mind is an obvious extension, people can chat in a relaxed environment and it take the pressure off the shop to sell so many big ticket items as the cafe shares the overheads.

If I was in a better financial position, I'd actually put some effort into this idea now I think of it, although I'd have to move to another town as thankfully we are blessed with 2 model railway shops in Lincoln already.