Warehouse Wednesday - Under a Brummie viaduct 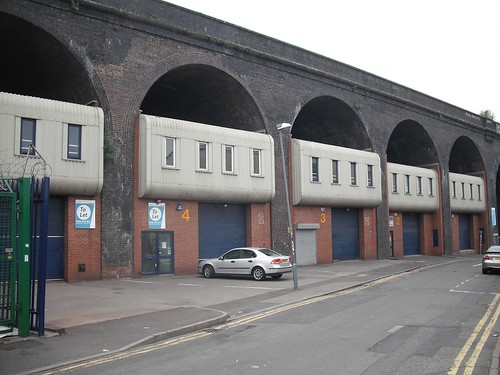 Here's a photo I've been looking for in my collection for a long while.Strolling around Birmingham, I spotted these modern industrial units tucked under the arches of a viaduct.

To me, they look a bit like alien spacecraft who have landed in the less salubrious area of our second city. Sadly, I can't remember exactly where this was taken, other than it's in the maze of railway that is south of Moor Street station.

Modelling would be tricky as the curved and ribbed walls wouldn't be easy to replicate. If you could make one, I'd be inclined to stick it in a mould and cast the rest in resin. The effort would be worth it though as some really eye-catching models would result from it.

Moulding would be one option.

Another option might involve reusing packaging. A number of things are supplied in clear plastic boxes, with rounded corners - anything from Ferrero Rocher to X-Acto knife clones.

The boxes used for X-Acto clones usually have a rectangular inset in the middle of both halves - presumably for lettering. This might also be useful for adding ribbing etc. on models. As an aside, these boxes might also be a suitable size for clear roofs on some designs of bus shelter in HO or OO.

Sometimes, you might also come across boxes like these with lettering on them - which isn't always a "red flag", if you can either remove or cover the letters.

I've mentioned the boxes sometimes used for X-Acto clones (which also have hinges and catches moulded onto them - both easily removed). When I was in a previous job, a strain gauge manufacturer supplied their wares in the same type of boxes, but with "metallic" lettering on the lid. Cheap paper masking tape soon took care of this - press some tape over the offending lettering - pull it away - repeat a few times - and the lettering's gone. (My employer was also glad to see the boxes gone - as they saved on skip fees and landfill.)

It might also be possible to reuse bodyshell sections from cheap torches, or even certain electronics enclosures, if you can find suitable ones at an affordable price.

Which, if any, of these boxes would be of use would depend on your chosen scale.