You know you've found your seat on the bus when some scroat has etched the word "Cake" into it.

Half an hour later, after an enjoyable vintage bus ride in a Bristol VR, I was eating cake, drinking tea and chatting while watching the queue slowly work its way into the building. I'm not desperate for 2nd hand stall action so waiting in the cold doesn't appeal to me. As it was, even when I tagged on the back, I was a long way from the door, it was a busy show.

Inside, I had a little shopping list so set about clearing that, reasoning I could look at layouts later when the crowds had thinned a bit.

This is a good plan, except I spent soooo much time chatting to people, my layout watching was very limited. A few did stick in my mind though: 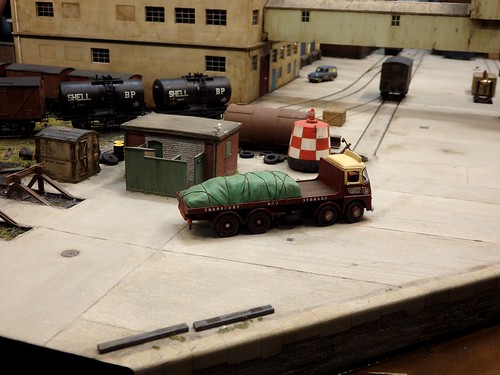 Canada Yard. Superbly modelled dockside buildings, loads of well made details. Bit limited operationally while I was there but to be honest, I could marvel at the workmanship all day. 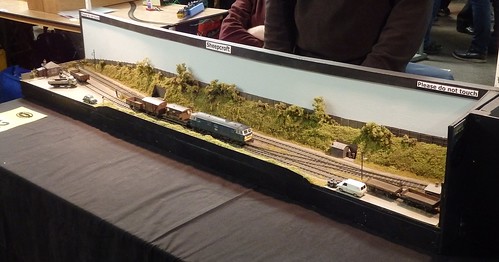 Sheepcroft. A micro EM project built to try out the gauge. Nicely done with a lovely little office and yard in the corner. The designed is deceptive, a gentle curve running through the model makes it look bigger than it is and allows valuable corner space for scenes. 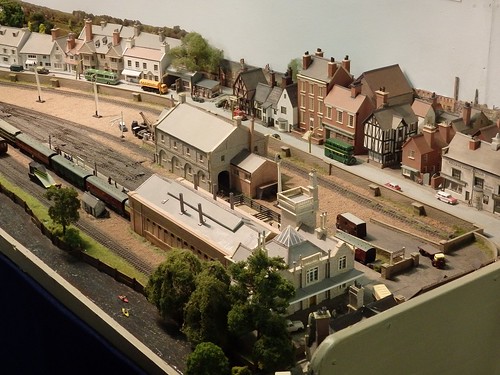 Stamford East. Obviously I'm interested in this one as I have a 4mm scale (this is N gauge) version of the station building as a project at the moment. Modelled with far more space than I have available, it's a good looking plan. 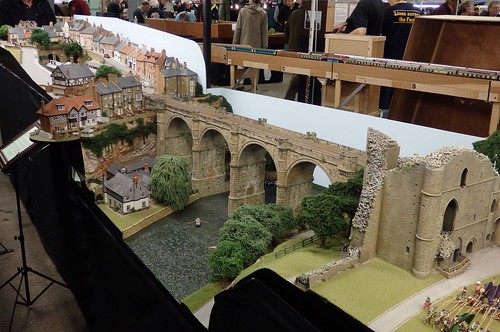 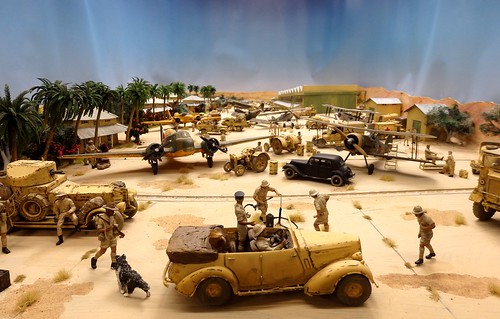 Habbaniya, Iraq 1941. Easily the most unusual layout present. A tiny viewing window opens out on to a scene modelled in perspective. At the front the models are 1/32, at the back 1/450. Trains move, a man pumps DDT and we look on in awe at the oddly shaped buildings that make the model look so much larger than it really is.

For once, I could have done with a day-and-a-half long ticket to see everything properly. Stafford is always a good show, but this was better than ever. The weather was kind (I've been in the snow) and the lunch in the cafe next to the hall (fish and chips) delicious and reasonably priced.

A few more photos including the all important cake shot can be found on Flickr.

It's interesting to see a Bristol VR described as a "vintage" bus - very interesting, in fact, as the majority of them would have been built in the 1970s.

(I'd rather not go into loads of boring detail here - if nothing else because I wear a wax cotton jacket - I don't even own an anorak! However, I can remember going to school in the late 70s / early 80s on a, then new, VRTSL3.)

In other words, the bus in question was probably significantly younger than a lot of the people who would have been travelling in it.

I could add that, personally, I quite like Bristol / ECW vehicles - especially the (single deck) RE, of similar vintage.


However, time - and legislation - has moved on since these vehicles were built.

A lot of VRs were replaced by Leyland or Volvo Olympians - which have, themselves, recently been required to be removed from daily frontline service use. This seems to be mainly because they've got step entrances and the floors aren't low enough to meet accessibility regulations.