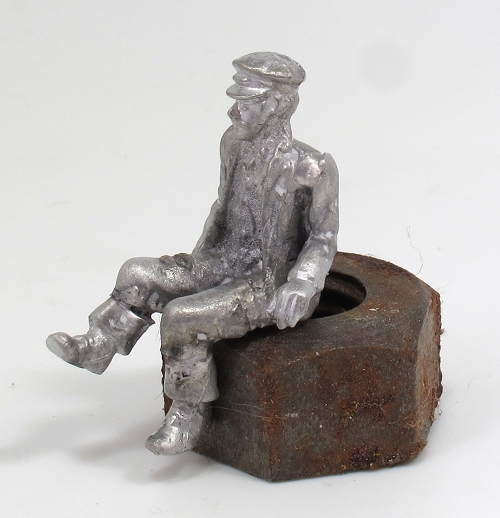 File this one under "Things most people probably do but it's only just occurred to me."

Needing to both assemble and modify a 7mm scale "Heroes of the footplate" figure, I decided to fire up the low-melt soldering iron and fix him together with something other than superglue.

Why haven't I done this before? It's a heck of a lot easier than using glue - the solder fills the gaps around the arms and more importantly, it's very, very fast. Within 5 minutes, all the bits were in place, including the ones I'd broken off when trying to re-position the legs by clamping them in a vice and shoving the rest of the body hard. The joins were good enough that I could file chunks off the bottom of the feet for final fitting in place. With a coarse file.

A little filler around that leg and he is good for paint. Next time, I'll remember and put the glue away.

Rather than a hero of the footplate, I'd have said he was a Hero of the ocean with those sailor's boots, but really are there no better modelled figures than that?

Well said. Another advantage is the ability to unsolder and reposition parts if you make a mistake or change your mind. Not so easy to do with glue.

Odds - The photo is at least 5 time life size on my screen and massive enlargement never does whitemetal figures any favours. There are better detailed models out there but not so close to the pose I needed. This will look fine on a layout from normal viewing distances.