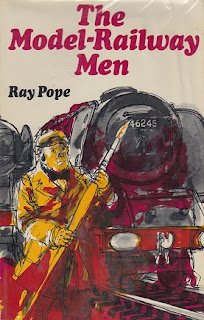 Ray Pope, who teaches at a high school, in Wiltshire, used to run a toy shop with a model railway department and has his own layout at home.

With this in mind, he wrote a book for children.

The story revolves around Mark, a young boy, who discovers that some of the people on his model railway in the attic are alive. For educational reasons, all the men are named after famous engineers.

I was reminded a little of The Borrowers, another tale of micro people living amongst us. In that book, they didn't try to educate a young lad on the finer points of running a railway - sometimes even when he really doesn't want to care.

Mark is lucky in that the little people gradually improve his railway, and are entertainingly sniffy about some typical model railway compromises such as sharp pointwork at the bottom of gradients, locos running at faster than scale speeds and operations that are designed for fun rather than efficiency.

My one niggle was the sense of scale. First indications of the presence of people is a pullover found on the platform. In OO, this would be miniscule! Later on, the womenfolk are delighted to be given access to scraps of material for making new clothes. Surely this would be far too coarse for them to sew?

Published in 1970, this is an interesting period piece. It's a very conventional middle-class family for the time. Of course mum has a bag full of material scraps and doesn't go to work.

Some of the chapters reminded me of my childhood - such as setting up a buzzer system with the cable going down the outside of the house and in through a window.

Interesting book, that could still be read to a toy-train man youngster today without seeming too dated.  And who hasn't wondered what would happen if our miniature people came alive?

Update: The book has been re-released and is available from the Talyllyn shop.

My junior school library stopped me from taking this book out as I was borrowing it so often. Will have a get a new copy!

I read this as a child. It is part of a series. The list can be seen here:
http://themodelrailwaymen.uk/books/index.html
and some can be found to read on Kindle.

Interesting review.
Yes the book does have similarities with 'The Borrowers' but then that has similarities with Gullivers Travels.
Also, 'The Carpet People' by Pratchett came out one year after The Model-Railway Men.
Marks house is 'middle class'. Yes it is but the small family are not. Marks mother was employed in real life. It may not have shown it here. Women are part of the story including taking active roles.
There is symbolism in this since the middle class are those that have the power both here and perhaps in real life away from this setting. Thus the story is also an examination of society, with many non judgemental observations.
However, the small family do demonstrate ways of influencing events throughout the series.
The individual is shown with their faults and achievements which is a different message perhaps to the Thomas the Tank Engine series which is more about conforming to the demands of the 'Fat Controller'.
Thus many issues are explored including teamwork, loyalty, respect, pride, history, science, technology and many more subjects.
As such, the series does much to counteract the somewhat stuffy attitude sometimes associated with railway fans. Who are not this way imo.
People reread these books perhaps see the layers involved in the stories. A bit like peeling an onion.
We see comparisons and contrasts since the small family seem to have been transformed in both size and time.
Meanwhile, Mark must become more of a responsible adult towards the small adult family.
In fact, the more you look at it, reality is turned upside down and the reader is challenged to look and think outside the box.
Maybe this is why librarians and libraries seem to have been quite keen on having these books on their shelves.
Either way, these stories are a product of the railway community and perhaps show a little of the creativity they have.
My father wrote them btw. Mark.