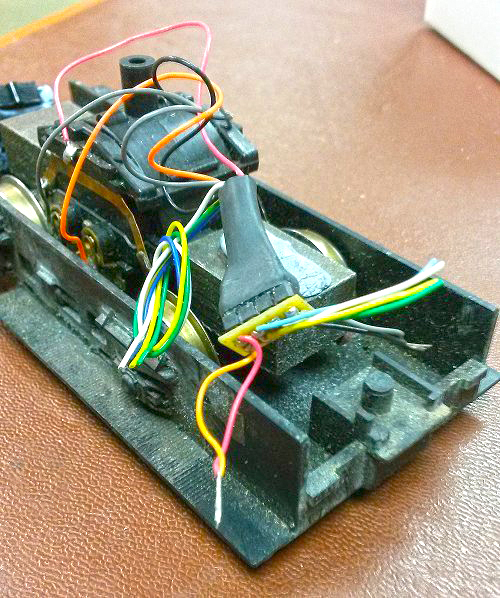 Last week, I had the chance to save a locomotive from the curse of DCC.

Pete had lent someone an old Lima 0-4-0 diesel shunter to test some Dingham couplings on the O gauge layout. Putting it on the track, nothing happened. A quick check with a German loco showed there was power, so the problem was in the model.

Looking inside, it had once been fitted a DCC chip but this had been removed a blanking plug  replacing the electronics. An unwired blanking plug.

Since this section of the layout uses God's own DC, all I needed to do was use the wires on the plug to joins the pickups and motor. Simple enough - just strip the ends of the wires and twist them together.

Result - the loco now works as intended. And I understand how a blanking plug works!
Posted by Phil Parker at 5:30 AM

Sounds like you've got the right idea with that loco.

Let's face it - who in their right mind would want loads of chuffing sound effects with a loco (especially if said loco is a Diesel)?

No - I'm afraid I've never seen any point in the "chips with everything" malarkey - too much to go wrong.