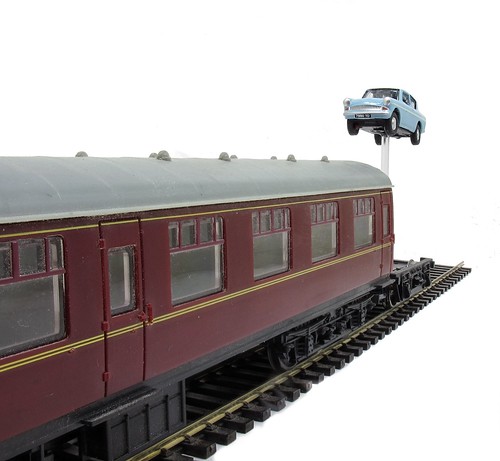 I've never seen a Harry Potter film. Not properly anyway. I projected one once when that was my job, but to be honest I was nipping in an out of the booth and cashing up so I didn't really follow it.

Nor have I read any of the books. I don't do fantasy and magic fiction. Don't know why, it just doesn't work for me. Terry Pratchet books suffer this way, something I'm a bit sad about, but I've tried and failed.

Anyway, I accidentally ended up volunteering to make a model flying car from one of the books. I've seen photos, it's a pale blue Ford Anglia, that flies. 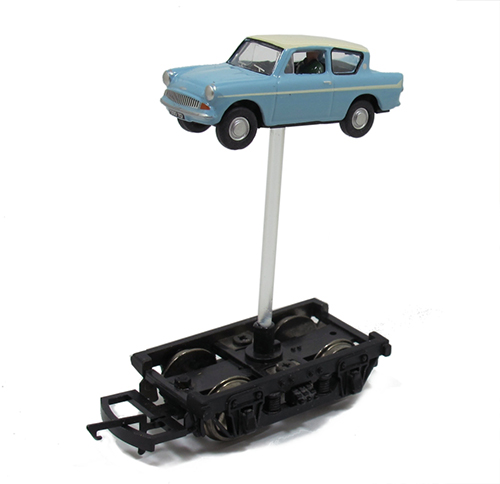 The first version uses a diecast model (Can't remember if it's Hornby or Oxford and have thrown the packing away) mounted on an old metal coach bogie of indeterminate origin discovered in the bottom of a drawer. The idea was this could be coupled to the back of a train for chasing purposes.

The supporting plastic tube is set so the car is just above roof height, but it's still out of gauge.

Testing at the railway club suggested that at speed, the model was just too top-heavy for corners, even with a slug of lead in the bottom of the bogie. 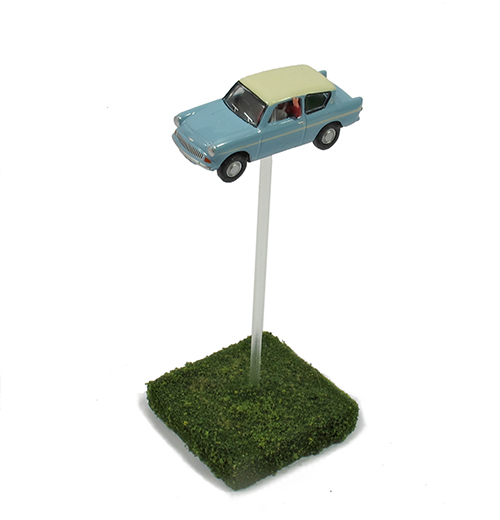 Since this is for children to operate, I doubt that they will run the model slowly, so a static version was in order. This could be taller and is nice and stable thanks to the block of wood stand. I've coated this with green scatter and used more of the plastic tube for support. I had to buy ten lengths of this, so I've plenty of spare.

All glue is epoxy to ensure the model stays in one piece. The tube goes into the car through a hole drilled in the floor and dipping it in glue ensures it stays put. Neither car flies perfectly horizontally, but then that's realistic isn't it?
Posted by Phil Parker at 5:30 AM

I think you should open this up as a challenge.

The first obvious thing to do is to reduce the weight of the car. Could you vacuum form a body shell? Does it have to be 4mm scale? Could you use a tilting mechanism (the Advanced Potter Train)Or could you use an old diecast loco frame to mount it on?

If die-cast is too heavy you could looking for an old plastic Minix Anglia and re-paint it. They can be had for a few quid off e-Bay, or I could sell you one...

The films are great, the books even better, and the 'Making Of' tour well worth three hours of your time, even if you don't like the films.

I like the idea of the Minix Anglia. I'll keep any eye out for one as these have gone to new homes, but building another would be fun.

It's just and excuse to poke around 2nd hand stuff really...