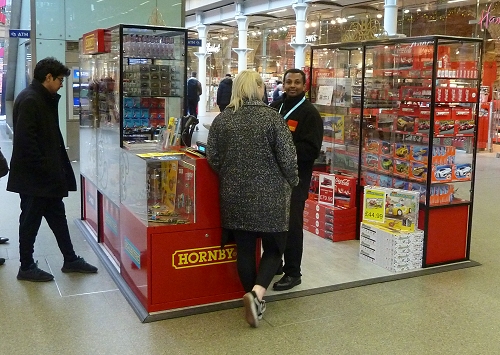 In London for some beer, I nipped into St Pancras station with the aim of spotting the latest train operator there - Hornby.

The famous manufacturer has opened a pop-up store in the lower levels of the station, where the beer barrels used to be and now you find high-end shops.

It's an interesting move. On the stand, you find trains, Airfix, Scalextric, Corgi and other diecasts. There's no paint or modelling materials, this is all aimed at the souvenir market for those nipping over to France on the train.  Prices are all full RRP, and compared to some of the other outlets nearby, this seems cheap!

I'm told that the pop-up is working well. Sales are good and I suspect that as a brand with wide recognition, the chance to buy something properly British works for those walking by. 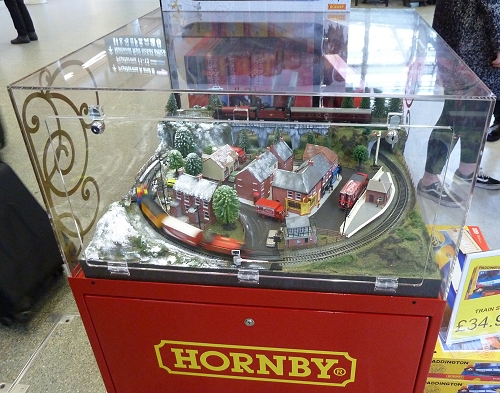 At the end of the stand there is a model railway. Nothing big - space isn't going to be cheap - but a train running around catches the eye. Enough that they could have sold it several times a week!

In addition to selling from the counter, the attentive staff hand out Welcome Cards which offer a discount at the Hornby Hobbies website until the end of the year. Presumably, since this is likely to be a new group of customers, that will get them interested later and spread the name further. I wonder how many will be carrying a train set or slot car track home that they hadn't planned on buying?

The pop-up is in place until Christmas Eve.