An eclectic mix of reading 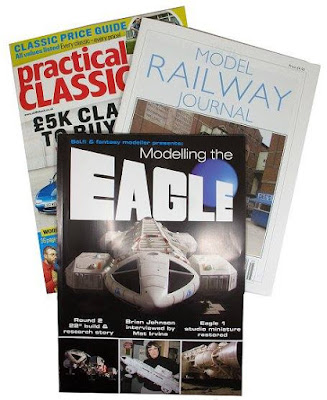 By the end of Thursday last week, I'd collected a mixed bag of magazines to read and I wonder quite what they say about me.

I've always slightly admired the sort of single-minded enthusiast who can stick to one topic throughout their life. These are the people who produce amazing models having scratch built pretty much everything.

Peter Denny for example, would never have created the Buckingham Branch if he'd run off and had a dabble with model aircraft or even (gasp) modern image. OK, he built a garden railway but it wasn't a huge diversion.

Pendon wouldn't exist without Roye England's dedication in the early days. No diversions into Morris dancing for him. No, recording the vanishing scene and then reproducing it in miniature was his bag.

I suppose the theme running through the collection of mags is making stuff. This issue of MRJ is the best in years with Gordon Gravett scribing wall surfaces and an amazing 4mm scale warehouse. My favourite parts of Practical Classics are those involving spanners and rust. A bit like modelling an Eagle Transporter, I aspire to have a go, even if time is short. Well, that and the lack of a garage with plenty of space to work (for the car, even a 44 inch Eagle wouldn't take up that much space).

I've mentioned this on the blog before and the response seems to be that like me, many of you have varied interests. While I might have some admiration for the single-minded, I also feel that a lot of them are missing out on so much of interest. There are obvious crossovers between classic cars and model railways - we'll have mini road vehicles on the layout after all. Sci-fi modelling is a harder leap but there are different painting techniques and if you want to build an Eagle, that framework on the back is going to have to be soldered up from tube in the larger scales...

You have to wonder what would happen if a model aircraft builder RC was asked to build say a Brunel viaduct or a top loco builder was asked to make an O gauge 1/48 scale Queen Mary transporter. How much transferable technique would we uncover? It's a pity there isn't a Magazine that covers all the disciplines, or at least a selection of the best ideas.

Model Maker magazine used to cover all the hobbies back in the 1980s. I suspect that the UK market doesn't have enough people interested in several disciplines to keep something like this going now. Railway modellers moan enough when their favourite scale/era isn't well enough represented even though the skills are largely the same.