Model making in the shopping centre 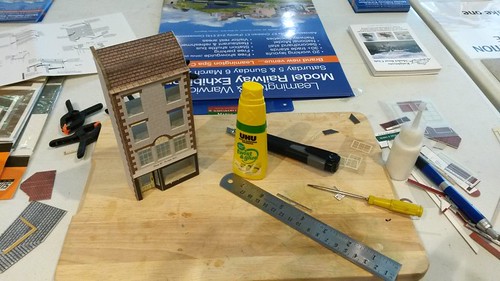 Last week, the L&WMRS managed to blag the only empty shop unit in or local mall to put on a pop-up mini show to promote the main exhibition in a weeks time.

In the ex-mobile phone shop we had an N gauge layout, multi-gauge test track, micro O gauge model and a circuit of American tinplate 3-rail. The US models showed their build quality with a faultless performance running around an oval track making noises and generally entertaining the public.

Just inside the door there was a table with my father and I occupied for a couple of days doing a bit of modelling.

I had really struggled to come up with any projects portable enough so just loitered and chatted on the Saturday for a few hours. At least until there were enough other club members on hand so I could go and grab some sleep to get over a bug that was slowing me down.

Sunday, I helped out assembling some Metcalf cardboard shops. Card buildings are great for this as normal people can actually understand what you are doing - sheets of brass or fiddling mechanical bits will turn them off as it all looks complicated and weird. Not to mention the smells produced soldering or painting aren't exactly pleasant.

Anyway, we sat, we chatted, we gave away loads of leaflets. Some shops were part built, they came home for finishing off during the week.

I wonder if we ought to do more of this sort of thing and less hiding away in sports centres with our own kind? Maybe if we took the chance to expose the hobby to the general public more often, we might be seen as less weird?

Then I remember the sort of people who will normally enthusiastically volunteer for such a job and think perhaps not...
Posted by Phil Parker at 5:30 AM