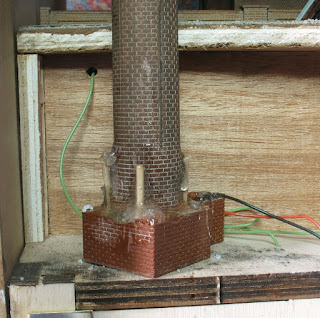 A feature of Ruston Quays that has proved popular but troublesome is the chimney at the back of the scene.

Popular, because at the touch of a button it belches pungent smoke everywhere.

Troublesome, because the stupid thing keeps falling over. It seems that the Faller plastic kit, fitted with a smoke unit, isn't strong enough to stand being swung around while transporting the layout. The chimney to base join keeps breaking.

At shows, I've also noticed the thing isn't vertical but can be prodded to correct it.

Finally, it had fallen off again so I've determined to fix it for good.

The base is filled with balsa wood, I did this when I built the kit anticipating problems, so I've drilled 2.5mm holes in it and forced cocktail stick in these. Finally, loads and loads of pound shop epoxy has been built up to bind the lot together.

You'll be pleased to know I did remember to check the verticalness with a small spirit level on the top.

Now dry, the stack seems a lot more solid than it was before. Prodding it doesn't move anything. I've still wondering if another dollop of glue wouldn't go amiss though.

How do you get the smoke oil in?

Dropped down the top of the chimney.