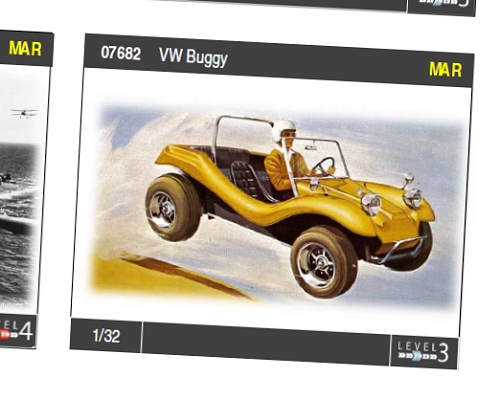 A few years ago, at Stanford Hall VW show, I spotted an unbuilt Airfix 1/32nd beach buggy kit for £15. And I didn't buy it. What an idiot.

Not only do these kits sell second hand for the north end of 40 quid, I would really like to build one. Young Phil was bought such a kit many, many years ago. It was built and painted orange but has long since disappeared (actually, the remains probably still exist in landfill somewhere...)

Anyway, watching eBay hasn't revealed a kit at a price I'm willing to pay, but it looks like I need only wait a little longer for my buggy fix. The latest news from Revell shows that in March next year, they are bringing out a 1/32nd plastic kit.

Sensibly the prototype appears to be a Manx Meyers  rather than something weird. This is THE classic buggy and the one we all want (Yes, I'd love to build a full size one).

Now, if Airfix would just re-release the Bond Bug kit from the range, I'd be happy...

Incidentally, the rest of the Revell announcements are:

I'm not sure if these were offered in the past - but I suspect that some people might find them rather interesting now.

A large scale Moggie (all variants) would be very nice. One for Airfix I suspect, but a good seller as it will appeal to a lot of sections of the hobby. Superdetailing the engine with leads etc. would be great fun.