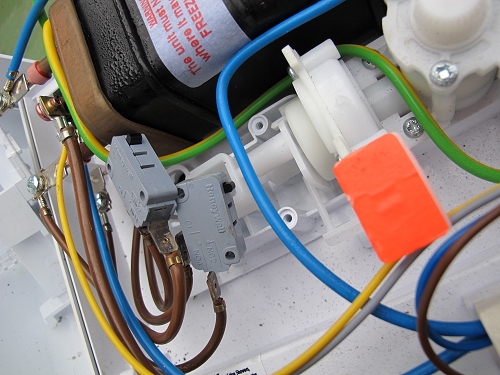 Last Monday, our electric shower suddenly stopped working. Water came out, but it was cold. The lights were on, it had worked perfectly well the day before, but not now.  This makes me grumpy - the day never seems to start well if I can't have a shower.

Anyway, a local plumber had replaced it by the end of the day for a very modest £150. For the purposes of this blog, I ought to claim to have done it myself but water and electricity aren't happy bedfellows so I prefer to leave well alone. More to the point, if the inlet isn't in exactly the same place then plumbing is required and probably fittings the man will have on his van and I'll have to go and buy. Stuff that.

The old shower was dispatched to sit on the top of our green recycling bin in the back garden. A couple of days later, I took a look and spotted the on/off switch. It looked interesting and was fitted with a couple of reasonable sized cross head screws.

20 very enjoyable minutes later, I'd retrieved the switch, a couple of microswitches and a few other bits. It was a pleasantly warm day and I was undoing screws in something I didn't need to put back together. I didn't really need to undo as many as I did, but I was having fun. 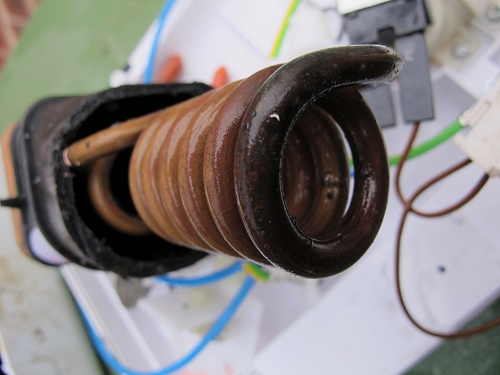 Out or curiosity, I had a look in the "boiler" bit. That's where I suspected the problem lay and I wondered how it worked.

Opening this up took a bit more effort - specifically chopping the plastic body in half with a hacksaw. Inside there are two heating coils. Turning the power switch makes each live in turn. That's why there are 2 microswitches operated from it. I still don't know what's wrong, but it was fun finding out. 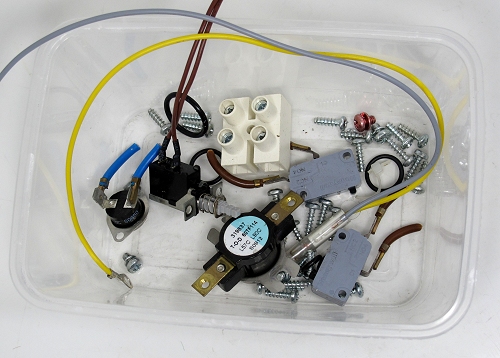 By the end of the dismantling session, I'd amassed a little pile of bits. I'm not sure what a couple of the round ones are but hopefully a multimeter will tell me more.

The rest is probably junk, although that mahoosive choc block looks useful. The bigger screws aren't self-tappers but have coarse enough threads that I reckon they can be forced into suitable pilot holes. The shorter ones are anodized a copper colour and just looked pretty.

This ought to be a piece where I buy the parts and repair the shower. It's not, because I didn't fancy trusting my skills where potentially deadly forces are mixing. That and delivery takes days and I wanted not to smell bad. As it is, the resulting landfill pile is much smaller than it would otherwise be and I've got some new bits to add to the box of miscellaneous electrical parts already rescued from other places. Hmmm.

Email ThisBlogThis!Share to TwitterShare to FacebookShare to Pinterest
Labels: DIY

The small "round bit" with blue wires is an Over temperature cut out. It is there to cut the power should the part it was fixed to become too hot,and you don't get scalded while having a shower. It's like a thermostat but is non adjustable and operates at a fixed temperature.
Those micro switches should come in handy somewhere on a layout, switching point frogs maybe?
They are rated at 15 amps so should handle anything you throw at them!
Cheers
Frank

the two round items are thermal switches which will open / close at a set temperature (sometimes indicated on the device). NO (normally open) types will close at the operating temperature whilst NC (normally closed) act in reverse, opening at the set temperature.
They are fitted as a safety precaution to prevent scalding should the thermostat fail or water flow stop mid-shower.

Thanks for that. Temperature sensors makes sense. I'll have a bit more of a play and probebly thrown them away as no use to me. Or just put them in the shoebox of electrical bits'n'bobs...

On second inspection of your picture the larger round item may be the flow switch (it's difficult to tell if it has water fittings) - if so then this will read open circuit until the required flow passes through it.
This would be fitted to prevent the heaters from kicking in unless there is a sufficient water flow.